Infographic: Increasing Jobs In Tech Being Filled By Women

60% of new tech jobs created in 2013 have been filled by women, suggest the latest statistics released by the Bureau of Labor Statistics. Maybe employers are catching on – you cannot afford to ignore half the population, where women hold 60% of bachelor’s degrees in the United States. Women are becoming highly visible business leaders and executives, starting with Facebook COO Sheryl Sandberg and Yahoo! CEO Marissa Mayer.

“Highest percent of women were in database administration at 36.6%, whereas just 8.1% of network architects in 2012 were women. Other categories include software engineers/developers (19.7%), support specialists (27.1%), and systems analysts (30.9%),” Infoworld reports on Anita Borg Institute analysis. 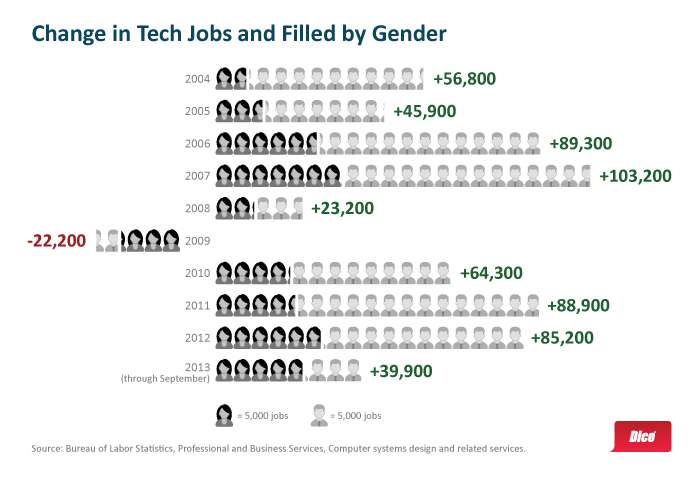 Whether this increase in women in tech is a blip/outlier or the beginning of a strong trend, we give thanks to the work of ambitious organizations teaching girls to code and to become entrepreneurs at scale – for example Technovation Challenge in the United States and Code Club in the United Kingdom.

Aside from encouraging girls to code, anyone at any age/sex/location can learn to code and build cool things by learning online through a plethora of online resources (esp. MOOCS) and accelerated software engineering schools like Hackbright Academy.

May the these 12 female CTOs become household names and grace magazine covers soon to encourage the next generation of girl coders and women in tech!

RELATED POSTS
RECENT POSTS
April 02, 2020
Is It Worth It to Become a Full-Stack Developer?
April 02, 2020
Python vs Java: Which Should I Learn First?
April 02, 2020
How to Prepare for Hackbright's Technical Interview
March 06, 2020
What Is a Web Developer Versus a Software Engineer?
CATEGORIES