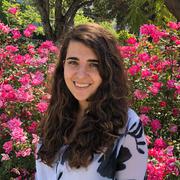 Meet Gabriela Borges. She graduated from Hackbright Academy’s first ever South Bay cohort in May 2018. Prior to Hackbright, she was a domestic violence advocate assisting at-risk domestic violence advocates. Since her graduation from Hackbright, Gabriela is looking to combine her background of social impact and her new skills as an engineer. She’s hoping to find a role with a company that works within the intersection of tech and society. Fun fact: she’s also a huge dog lover! When she’s not coding, you can find her walking her Chocolate Lab.

In June, Gabriela attended Girl’s in Tech’s annual Catalyst Conference on behalf of Hackbright. Here, she’s sharing her key takeaways, in her own words.

Girls in Tech (GIT) is a global non-profit organization focused on empowering women and girls who are passionate about tech. GIT hosts and annual Catalyst Conference – an event designed to celebrate women at various levels in their careers. The conference’s “TED-style” presentations allows for inspiring female leaders in tech to speak about their career journey as well as give advice they would like to pass on to the next generation of women in tech. The Conference took place in San Francisco on June 13-14 this year. It was two full days of inspiring keynotes from female leaders.

It was a truly remarkable event. On the first day I arrived it was unlike any professional event I ever attended. The sheer amount of diversity in the room took me aback. Women of various ages, racial backgrounds, women who hailed from various professional backgrounds such as entrepreneurs, software engineers, product managers, venture capitalists, students, teachers, and various others were packed into a single event space.

I thought I would feel anxious or a bit out of place considering my recent transition into software engineering from a liberal arts background but instead I felt fully included. I belonged.

The speakers, women who are leaders in the tech industry, made the event a safe space to ask candid questions. There was no sense of competition but instead it was a space where women could support each other, give each other advice and most importantly inspire one another.

Both days started at 8:00am with breakfast, networking, and registration, and ended at 5:30pm. Between those hours were 25 women ranging from CTOs, CEOs, CIOs, VPs, Venture Capitalists, Aerospace Engineers, and everything in between giving talks with titles ranging from “Be the Change You Want to See in the World” to “Find Your Extraordinary.”

I want to highlight a few of speakers who really inspired me. One was Danielle Feinberg, Director of Photography for Lighting at Pixar. She worked on nine of Pixar’s 14 feature films directing lighting for Academy Award-winning films like WALL-E, Brave, and Coco. In her talk, “Bringing Imagined Worlds to Life,” Feinberg not only spoke about her work in Pixar but also about her experience being an outcast in her 8th grade construction class. The class’s objective was to create a lawn mower from scratch. Feinberg’s love of Legos and creating things from scratch (this eventually translated to her love of coding) propelled her to enroll in the class despite her knowing she would be one of the only girls in the class. She was. Yet, despite her feeling out of place she kept on constructing her lawn mower and at the end of the class all the students had to test their lawnmower. She waited when all the guys in her class were pulling their lawn mower’s cord but nothing happened and it was her turn, despite her fear she pulled on her lawn mower’s cord and it came to life! Feinberg explained how all the boys in her class were completely shocked yet this experience taught her to follow her own voice. She eventually wrote about this experience in her college essay and was accepted into Harvard where she studied computer science. As Feinberg stated, “You follow the things you love. Are you going to fit in or stand out? It’s the things that you make you stand out that matter in the end.”

Another talk I wanted to highlight was that of Rathi Murthy, CTO at Gap Inc. Murthy’s talk was titled, “Growing Your Confidence to Grow Your Career” in which she spoke about finding your voice. She detailed her experience being shy in her classes growing up and never raising her hand. She said women generally don’t speak up in meetings until there is a topic they are experts in but Murthy said we shouldn’t be like this. Though the journey of finding your voice might be slow, we need to be able to not fear failure. You should go into a meeting knowing you’ll raise our hand at least once and prepare at least one thing you want to share with the group so your voice will be heard. Having the ability to confront failure without fear opens opportunities. As Murthy said, “Never be afraid to fail. If you’re not afraid to fail, then you make room for confidence. It’s difficult, but it’s a journey.” Murthy also advised women to be authentically themselves and lastly work hard!

I only highlighted two speakers but there were so many more which also resonated with me. I myself have felt like an outcast, considering my new career transition into software engineering and experiencing imposter syndrome. Several women presenting detailed their crooked journey into their own career and reassured me that such a journey is completely normal. Failure and uncomfortability are essential for growth.
All in all, I must say the Girls in Tech Catalyst Conference was beyond inspiring. I not only heard from women leaders in the tech industry but I also met amazing women who shared with me their career journeys and their experience being a woman in a male dominated industry. The conference gave me the energy boost and confidence I needed heading into my job search. And if I ever need that energy boost again I know there’s a community of women in tech that are there to support my journey.

Interested in hiring one of our recent grads? Contact our Partnerships team to let us know about your current openings!

Want to learn to code? Check out our upcoming Prep Course and our immersive 12-week full-time or 24-week part-time Software Engineering Programs.