“I really don’t think that getting a masters in CS is worth it, if you want to be a web developer. Just get your stuff together, work really intensively for 12 weeks, and you’ll be prepared to be a software engineer in this industry.” 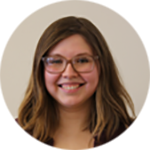 Ksenia Burlachenko is a Hackbright Academy graduate who completed her program in Spring 2013.

She now works as a Software Engineer at Perforce and considers Hackbright to be “one of the best experiences and best decisions of [her] life.”

What were you up to before you applied to Hackbright?

I came to the US six years ago from Russia to study. Before Hackbright, I had graduated with a degree in Economics from USC. And I really loved economics- I loved problem solving and hard analytical skills, but I couldn’t see myself doing this for the rest of my life. One of my friends just mentioned programming to me and suggested I try to pick it up. So I tried a few courses online and I really enjoyed it, and started to consider a boot camp. Hackbright was the first boot camp that I heard of – I applied and got accepted right away. I looked at other Bay Area boot camps, but none of them looked as interesting as Hackbright.

After I filled out the online application, I got a Skype interview with one of the cofounders, David, where he asked me about my story. Then my second interview was with Christian, the other cofounder. That interview was more about problem-solving and logic questions. He walked me through a technical problem and we used pair programming to approach it – I think it was about Statistics or Probability. I ended up solving it in 20 minutes, and it was actually the first time I tried programming out loud – I realized then that I should definitely pursue it.

We went through Learn Python the Hard Way. Since most of the students have no programming experience before the class starts, it’s recommended to try to work through the book as much as possible. I also looked through some computer science books – I wasn’t able to get through the whole thing though!

Did you have a preference for learning Python?

What kind of students were in your cohort?

I’m sure you know that Hackbright is a program only for women, but everyone came from a different background. A few from finance, a few from the East Coast, people who had established careers and some just out of college. We all connected really well – one of the great things about Hackbright that I’m not sure if other bootcamps have is that it’s a really strong community and everyone is very supportive of each other – we share resources, job postings. There is a huge network of alumni. You’re spending so much time together during the class and you ultimately become best friends, and at Hackbright, I found some of my best friends. I consider Hackbright one of the best experiences and best decisions of my life.

There are a number of online boot camps and online classes that teach Ruby and Python. Why did you choose an in-person class?

For me, it was a very clear decision. I think some people are really smart and disciplined and can learn and structure a program by themselves. But I need to be with an instructor and have more human interaction. I don’t like to be stuck and spend three days looking for an answer on Stack Overflow when I have an instructor who can, not necessarily give away the answer, but just lead me in approaching the problem. I don’t think you get this with an online course.

I learned other programming languages after Hackbright on my own, which was much easier. But it was important to me to get my first programming experience with an instructor. Also, Hackbright instructors are just amazing – incredibly smart and supportive. Nobody is pitting us against each other – they really want everyone to succeed. Christian was our lead instructor, and Liz & Cynthia were assistant instructors in my program.

Can you describe the curriculum? Did you complete a project at the end?

During the first half of the course, you learn fundamentals of computer science and utilize pair programming. You pick small exercises and complete them with another person. Then, for the next five weeks you work on your personal project. My project was a bit unique, in the sense that it wasn’t a practical project- it wasn’t a web app. I implemented a singular value decomposition from scratch in Python and applied it to movie ratings data. Basically, it’s a prediction algorithm – and it was my first try with machine learning. In my class, everyone had their own preferences for what they would do after Hackbright, and I thought I wanted to do data analysis, but I wasn’t sure, so I tried different things. I realized that I like back-end development more than web development. I got so much support from instructors figuring out what my strengths are.

Describe your experience after Hackbright – how long did it take you to get a job? Did you feel fully prepared to interview?

At the end of Hackbright, there’s a career day. It’s like reverse-speed dating: each Hackbright student has their own station, and 20-30 companies switch from station to station, learning about each candidate’s projects and what they want to do. Then, maybe after that they bring you in for interviews. I got hired by Perforce within one month of graduation, which was a partner company with Hackbright (I actually only interviewed with Hackbright partner companies). Right now I work as a Software Engineer. Their policies have changed since I graduated, but when I took a job with a partner company, I got my full tuition refunded.

What does your job entail now?

I work for Perforce, which is source version control system (a similar project is Git). The project I’m working on is called GitFusion; it’s an integration tool that let’s you use Git with Perforce on the back-end. I really like my company and my teammates, and I’m still learning every single day, which I think is the most important part for me. I use several operating systems, like Linux-based systems, in my new job, which is something I didn’t learn at Hackbright. And I had to pick up Perl.

Do you feel like at Hackbright, there were specific programs geared towards combat the imposter syndrome and prepare you to be a woman in this industry?

Absolutely. Every week, we have tech talks, and several were focused on being a female engineer in a heavily male-oriented field, which helped a lot. There were also sessions on how to go through an interview, present yourself, and negotiate your salary. A year ago, I didn’t know what Python was, and I’ve made so much progress. I always felt that for women, it’s hard to get into programming because we get discouraged and we feel like imposters. You’ve heard of Lean In, but when you’re actually a woman experiencing it, you may not understand that it’s even happening to you. Whereas at Hackbright, I got so much support and eventually, I realized that I really am awesome and have the skills for this.

Since you’ve graduated from Hackbright, what has your experience as a woman been in the tech industry? Do you feel like the landscape is changing?

I feel like it’s still a very male-dominated industry. I’ve never really faced discrimination in the workplace – it’s more like little things that other people don’t notice. For example, when someone tells you that you should be preparing more for a presentation, and you start doubting yourself. It can slowly crawl up on you. And I have to say that everyone at my company now is very supportive, but sometimes, when you’re socializing with engineers or at conferences, you see that it’s very male-dominated, and you have to work harder being a woman. You’re in a battle with yourself every single day, but I still know that I should be programming and have the skills for it.

Have you noticed that colleagues or companies have looked down on having a boot camp education, as opposed to a Computer Science degree?

In the beginning, when I got hired by my company, it was a leap of faith for them. But I think right away, I blew away any concerns that they had, and it was clear that I was going to be successful in this career. They saw that my level of preparation and skill was just as good as someone graduating from college.

Any advice for students considering applying to Hackbright or a coding boot camp?

I think that programming is a skill that you can learn in an intensive setting in 10 to 12 weeks. If you learn the fundamentals and if you enjoy it, then you can learn programming. I really don’t think that getting a masters in CS is worth it, if you want to be a web developer. Just get your stuff together, work really intensively for 12 weeks, and you’ll be prepared to be a software engineer in this industry.

Want to learn more? Check out Hackbright Academy on Course Report for courses, costs and reviews.