Hackbright Academy’s Fall 2014 engineering fellows visited Pinterest headquarters in San Francisco last week! Thanks to diversity tech recruiter Kate Fiedelman, the students were treated to a tour of the office, a tasty lunch at Pinterest, and an informative tech talk by Pinterest engineering manager.

She’s excited about “Pinterest for business” and working on ads that both users and advertisers love:

“Google truly believed that the best results are the ads. A lot of people don’t realize that the first 3 results are ads. At Pinterest, the teams focus on showing the right ad at the right time, every time. There is a lot of machine learning, algorithms, infrastructure. Launching an API dramatically scales the number of objects in a system and learning how to scale that very quickly. Google targets ads to what you want to see, Facebook made ads more personal, Twitter broke ground in in-feed ads. Do what you love, instead of just the opportunity.”

“I realized I wanted to work at a company at scale. 400 Pinterest employees with 750 million pin boards. That is a lot of info that needs to be stored, served, processed, needs to not go down. The scale and engineering excitement. Visual search is interesting – visual discovery demonstrates unexpected value and opportunity. Active tattoo community, who knew? Comic book collections, humor and quotes board are popular as well. IKEA hacks. Home decor. We have a ton of information at the object level. We have a pin with textual information to tie it to other pins. We know what board it’s tied to, what image is there, and there are words in the description and comments. We know who added it and who else added it along the way. When you start to tie that information together, the pin belongs on a lot of unrelated boards – an interest graph that is more human-curated and is human-powered discovery.”

• Tilde writes code and reviews code daily. There is a collaborative culture at Pinterest with some amount of meetings.
• Stephanie deals with other teams to build internal tools for accessibility and analysis. She get a lot of feedback to improve the product on a daily basis, with lots of meetings for the team or for the product she’s working on.
• Sahana has been doing work with a project with another team – a designer, a product manager, maybe another engineer – to crank out a feature as fast as we can.
• Kelsey builds lots of backend solutions – storage, caching… pretty large team of 16 people but each task is 2-3 engineers at a time. She does code reviews, she produces her own code, has sync ups to make sure everyone is on track, and interviews prospective new Pinterest engineers.

What is your biggest accomplishment?

• Tilde got to dive into the web platform and understand who it works – and then she found out that she really likes deleting code.
• Stephanie made a internal visualization tool so Pinterest staff can visualize any data, used by everyone including the CEO.
• Sahana’s coolest project so far is a complete redesign of all user profiles.
• Kelsey helped with a major company-wide goal – a new data store for the user typeahead. Her team wrote a blog post about it on the Pinterest engineering blog.

Biggest mistake or failure to learn from?

• Tilde recalled that when she first started at Pinterest, she didn’t ask many questions so she didn’t ramp up as quickly as she could have. With coworker feedback of “don’t be afraid to ask questions” and “no engineer knows everything” and “you won’t look stupid if you ask questions”, she got better about asking.
• Stephanie talked about the opportunity in having access to user data and shared an experience at Palantir where she interned. She built a project but couldn’t test it. She underlined the ability to be flexible and realize that it’s not under your control what you can do with your projects.
• Sahana also talked about working on one project the whole summer that didn’t ship. She also shared an experience where she broke the Pinterest website with a “small CSS thing”.
• Kelsey shared an experience from her days at A9 where she added some code and didn’t realize until the next day that it broke something. Everyone breaks something at some point. For the most part, people are very understanding and supportive, she underlined.

• Tilde talked about her Hackbright project as being kinda frontendy. She learned HTML, CSS and JavaScript and did the standard interview practice. She lined up a few interviews at companies she was less excited about, and didn’t take rejection personally.
• Stephanie emphasized the need to be persistent with the recruiter – “Make their life hard until they give you the interview. Unless they are very explicit, you are asking for the interview rather than the job from the recruiter, keep that in mind.”
• Sahana shared that it’s important to know about the product at the company you are applying for.
• Kelsey underlined that if you are interested in the company you are interviewing at, learn about the product and have ideas for feature or things you’d want to change.

What NOT to do to get a job at Pinterest!

• Tilde said it’s a big red flag when an interviewee has no questions for the interviewer – it shows you are not engaged in the interview and makes her less inclined to hire.
• Stephanie encouraged Hackbright fellows to build on their GitHub and to have examples of code for people to look at. Also, she shared that interview debriefs will note how well you take interview feedback (ie. do you shut down or ignore it?). When interviewing, you don’t have to nail the solution as long as you work in a collaborative way with your interviewer. Talk a lot – don’t be silent. Talk about your thought process.
• Kelsey highlighted that if you have an interview that isn’t going well, and you are still interested in the company, solve the problem later and then follow up with the interviewer by email. This shows initiative and that you are still interested in pursuing the opportunity. Kelsey has ended up with offers from places she’s done this at.

Thanks again to the Pinterest engineering team for hosting the Hackbright Academy class! We had a blast!! 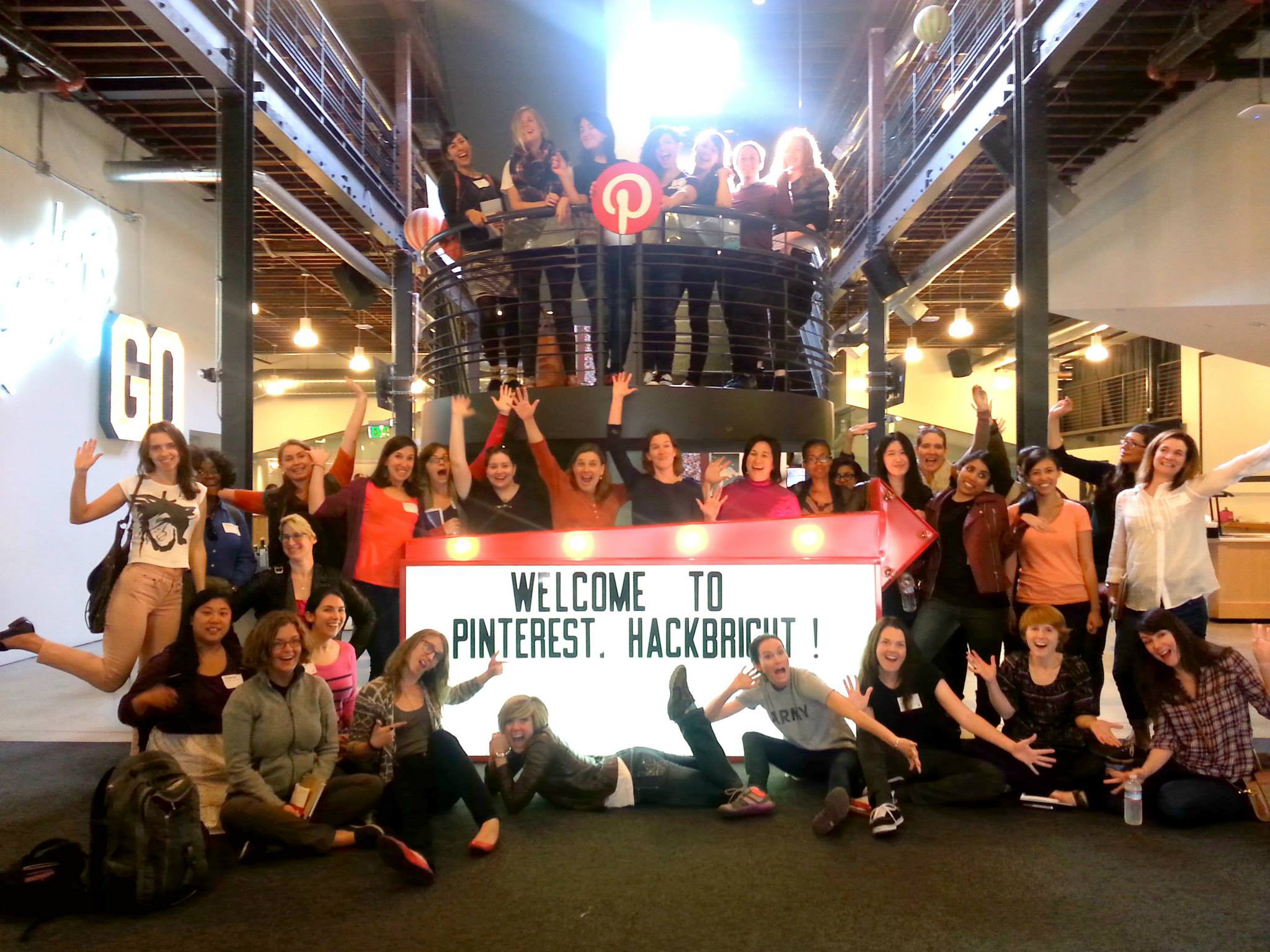