Dr. Maria Klawe sits on the board of Microsoft, holds a PhD in mathematics, and is currently the fifth President of Harvey Mudd College – where the percentage of women graduating from the computing program increased from 12% to approximately 40% in five years.

She speaks frankly on the topic of imposter syndrome:

“I have started each academic year by telling the first-year students about impostor syndrome, since I know many of them will have times when they wonder whether they belong and whether they are as talented as the other students around them. I give them advice on how to cope: Ask for help and take it, recognize that such feelings are common and are often connected to high degrees of success, surround yourself with people who encourage you, share your feelings with others, celebrate your successes, be willing to try new approaches if your usual one isn’t working, and don’t let your fears stop you from giving your best effort.”

Maria shared some important lessons in a conversation with leading women in technology and entrepreneurship in the Silicon Valley, hosted at GoDaddy last week —

Maria recommends negotiation training as a way to handle conflicts in the workplace:

“You have to be willing to learn a variety of skills as you move up: negotiation, conflict resolution… I think this is something that can be really useful. Talking about yourself — it’s not bragging, it’s value add. Communicate in a way that other people can hear you to have a place at the table. We are transitioning into a world where women have positions of greater power. We can then demonstrate more inclusive ways of leading than the people currently leading. Because we are moving into a space we haven’t been before, both the men and women are developing better skills. They are seeing the value of diversity. Students from inclusive environments like Harvey Mudd are more intentional in where they want to work. They want their workplace to be inclusive too.”

Negotiation in the workplace means that what starts as an individual negotiating in the context of an existing negotiated order might yield to more systemic changes, which can create an entirely different playing field for those negotiators who follow.

Lesson #2: Importance of Inclusion for Diversity

For diversity to succeed, we have to first create an inclusive environment. To illustrate this point, Dr. Maria Klawe shared the story of Accenture CHRO Ellyn Shook who worked to increase the ratio of women hired at Accenture. From rewriting job descriptions, to changing the process of hiring and sourcing, Accenture successfully increased their ratio of women from 30% to 43%.

“Technical interviewing is very adversarial. It’s often the case the female being interviewed will not see another female in the process. Technical interviewing doesn’t predict for hiring the best candidate, or women. At Accenture, job descriptions were updated to stress team work, creativity, problem-solving — not particular skills.”

She stressed the importance of making sure your interview panel includes at least one woman to hire more women into your company.

In the interview process, ask more interesting questions, like:

“How would you explain Java or any other object-oriented programming language to a five year old? You are looking for the general idea — to see if down one knows an overall concept rather than particular details. Frame it less about data structures, and more about how do you understand basic concepts? How would you explain it to someone who is not an expert?” 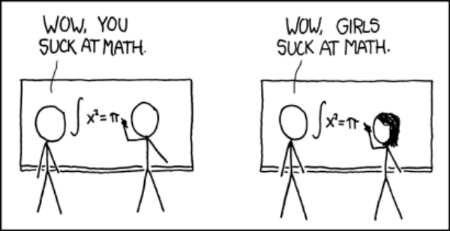 In a Q&A discussion on hiring and promoting women, the issue of bias was broached.

Part of the problem in hiring more women is a need to debug our own biases in unravelling the false promise of meritocracy. For example, research has shown that those who think they are the most objective can actually exhibit the most bias in their evaluations.

What can you do right now? Try taking some 5-minute tests for various biases to become more aware of your own biases in recruiting women or hiring women.

The other half of the problem is female candidates not applying themselves upward and being conservative in their job searches. As Maria Klawe dryly noted, “women often tell you the things they are not” to be appear polite or modest. Instead, try using “I” statements like “I want…” and “I need…” to express needs and abilities (“I can…”). Also, try applying for more ambitious jobs outside of your comfort zone.

Recognizing all our biases in the recruiting process on both sides will help women be considered for positions across the board, from entry-level to the highest levels.