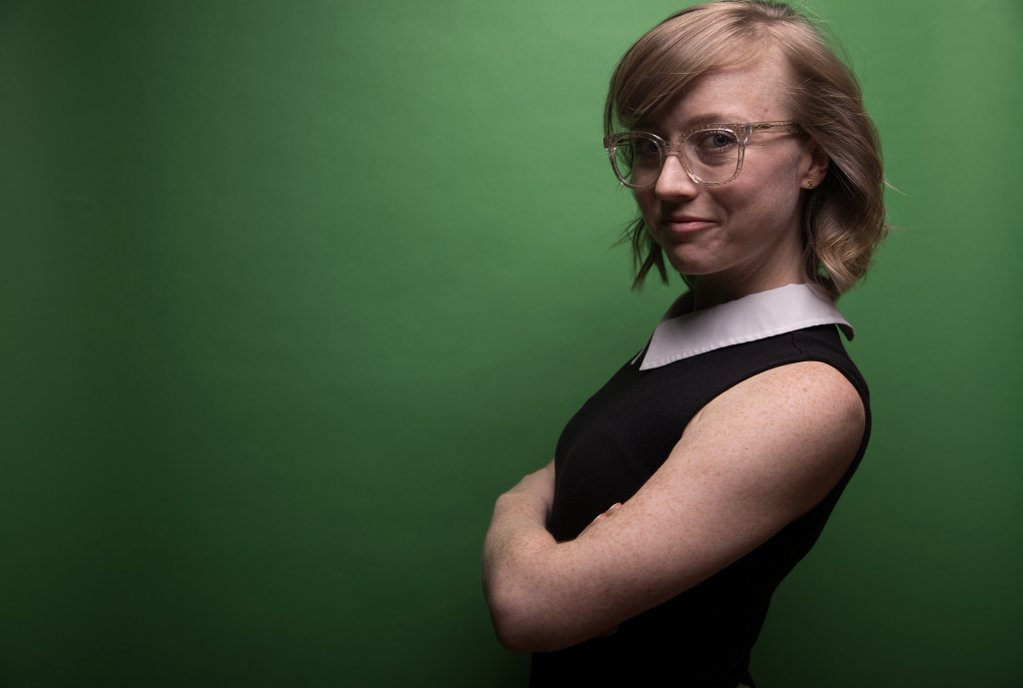 About the Author: Chloe Condon, Hackbright Grduate Dec ’16. A former musical theatre actress and Hackbright Academy graduate, Chloe is now a Developer Evangelist at Codefresh. Pre-Hackbright, she spent her nights and weekends performing in the Bay Area as a singer/actress and worked in tech by day. To support her theatre career, she started to learn to code on her own through online resources. Now a Hackbright Ambassador and Mentor, she is now the first female engineering hire on her team, and is passionate about bringing people with non-traditional backgrounds into the world of tech.

Not too long ago, I attended my first conference as an engineer. To give a bit of context, before I made my career transition into software engineering, I was a musical theatre performer. Theatre, unlike STEM, is a field that is in dire need of men. Seriously, want to do musicals? Can you kind of carry a tune? Are you a dude? You’re cast! But I digress…

Here’s how my inner-monologue sounded:

“So…many…dudes… oh! Is that a woman? Hmmm, no… she’s on the catering team. Oh wait! Is that another one? NOPE just a dude with a man bun.”

The irony of all of this? I am more often than not giving talks on diversity at these conferences. Which, hey, is great! It means that the people running these conferences see that there is a problem and we need to fix it. But, seriously… this begs the important question: Where are all the women in tech? Or, to put it more casually… where my ladies at?

I think it’s important to note that with the many attempts to get “more women in tech” and “add diversity to teams”, it’s important to approach this issue with passion and enthusiasm, but also with a sense of humor and forgiveness. You’ll notice that this article does not come from a place of anger, but from a place of understanding. As a feminist, and a female engineer, I make it a point to be approachable and not get upset at people for their missteps or assumptions of me in this industry. Much like I wouldn’t want a male engineer to chew me out over assuming he’s an engineer based on his plaid shirt and Patagonia jacket, I wouldn’t ever want to be aggressive towards a male for assuming I’m not an engineer. I don’t look like the classic stereotype- mistakes happen. We should all be able to have a healthy conversation about this.

And so, I’ve put together a top 5 list of most common experiences that’s I’ve had as a woman at these conferences. Ladies, here’s what to expect/perhaps what you’ve experienced. Gentlemen, here’s an insight:

Most People Assume I’m Not a Developer ‍

As a female engineer at a tech conference, I find myself constantly having to prove myself to most people I meet. Be that by dropping engineering buzzwords, wearing one of my engineer inside joke shirts (“World’s Okayest Engineer” is one of my personal favs), or simply saying my job title; more often than not, people assume that I must be “some girl they hired to run a booth who is trying to get some swag” from them or “someone’s daughter tagging along to the conference” (to be fair, I used to play teenagers during my acting days… but I digress).

To give some context, I’m a quirky 5’2″ blonde girl with sparkle glasses and, on occasion, sporting pigtails or a bow in my hair. At first glance, an individual may think “oh- she must be Zooey Deschanel’s stylist”. But I promise I’m an engineer you guys.

Ah yes, one of those rare occasions where the women’s line is… well, non-existent. I’ve started to have some fun with this by having impromptu photoshoots in them. Enjoy these gems:

The After Party Can Get Awkward

Ok cool- now you know how I have felt at almost every after party I’ve been to at a tech conference. Luckily, I’ve only had 1 awkward oh-god-please-leave-me-alone situation so far (pro-tip, never call anyone a “hott nerd” to break the ice).

Or speaker jackets. Or socks for that matter. Yeah, just don’t expect any apparel to remotely fit you.

I’m always thrilled when a swag booth carries women’s sizes, and take a lot of pride in the fact that Codefresh always has an ample amount of women’s apparel in all sizes. Shoutout to Mapbox, Dropbox, GitHub, Docker, and Women Who Code for being the only companies that have provided me with shirts I can sport proudly without feeling like a 5 year old wearing her dad’s shirt at a sleepover.

Though there may not be many, there are usually a handful of other lovely, smart, interesting women at these things. My favorite example of this would have to be Shilpa Rao, a 15 year-old who I met on the conference floor at DockerCon. Shilpa and I wandered the expo floor for a bit together and chatted about what it’s like to be a woman (and young adult) at a tech conference, and how sometimes it can be difficult to have people look past stereotypes. Shilpa seemed to be experiencing similar assumptions as a younger person as I was as a female engineer. Jokes on them, though; she is the co-founder of STEAM Team– a youth led organization geared towards bringing education and resources to the children of underprivileged communities in the Bay Area, and she even edited the following video for her company.

Look out for this one, you guys- she’s fierce. Keep smashing those stereotypes, Shilpa!