Python vs. Ruby: What’s the Difference?

At Hackbright Academy, we teach Python as a foundational language, but we think it’s important to know the difference between Ruby vs Python before you even begin.

In order to understand the Ruby vs Python debate, it’s important to know not only the differences but the similarities between these two coding languages.

How are Python and Ruby similar?

Unlike codes like C++, Python and Ruby are both language-based codes, meaning they are easier to read and understand — especially for beginners! This is especially helpful for first-time coders. Learning Python or Ruby can set new coders up to have a firm grasp of coding logic when they start different languages.

One reason these two programs are easy to understand is that they are object-oriented, which means they depend on packages to help simplify coding.

Think of it as the difference between making homemade cookies and using store-bought dough. Homemade dough is an object made up of a number of different tasks (pour and measure ingredients, beat dough, etc.), so making cookies with store-bought dough is vastly easier.

Python and Ruby are also open-source languages, meaning you don’t have to pay licensing fees if you plan to sell any software that you develop. Open source also means you can modify other existing software, which can provide valuable insight into what makes these codes run smoothly.

Both languages also rely on frameworks for web development: Python has Django, while Ruby has Ruby on Rails. These frameworks were developed using their respective languages and help support coding for web applications. Django and Ruby on Rails are also very powerful tools utilized by high-powered companies. 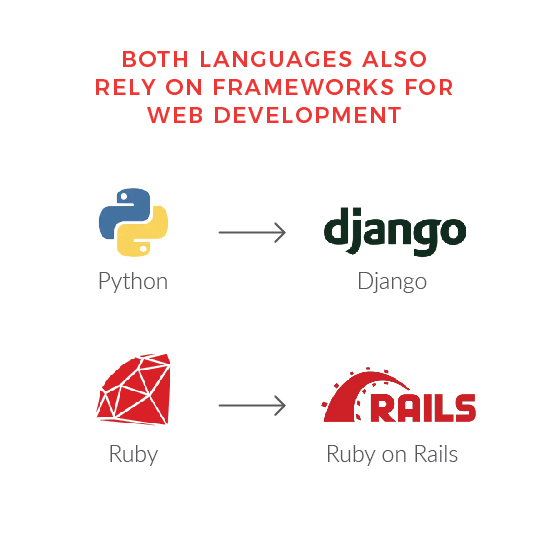 Of course, the one major downside Python and Ruby share is the fact they both tend to run slower than compiled languages. If speed is your primary objective, it might be worth considering another coding language altogether. That said, Ruby and Python are still plenty fast and extremely useful. In fact, there are lots of companies that use Python or Ruby for their primary code.

Who Is Using Them?

In the battle between Ruby vs Python, it’s safe to say that both of these coding languages are popular for a reason. 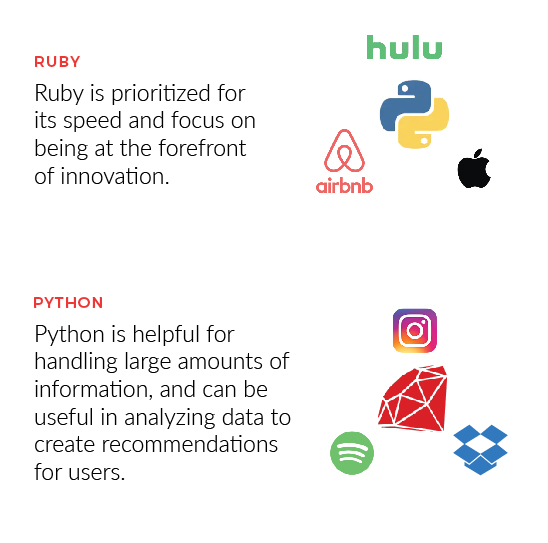 Python is helpful for handling large amounts of information and can be useful in analyzing data to create recommendations for users.

Basically, if you’re looking for employment, there will be options available with either language. Granted, even though both Ruby and Python are utilized by major companies, Python tends to be a more popular language due to its wide range of applications.

It might be worth doing some research into what you want to be doing with your coding. Try to figure out what language companies you admire are using, ask around in your network or even simply look into tasks you think you would enjoy and start from there. Also, if there is a school or bootcamp that has a better reputation, you should also consider that in your decision.

What’s the Difference Between Python and Ruby?

Of course, people wouldn’t be asking about Ruby vs. Python if there weren’t some major differences between the two. One of the biggest divides comes from the core principles guiding the creation of each language.

For Yukihiro “Matz” Matsumoto, creator of Ruby, coding ought to reflect the philosophy that machines were created to serve humans, not the other way around. This is why Ruby is extremely easy to read, even when compared to Python. The trouble is, this ease comes with a slight problem: With so much of the process obscured, it can be hard to debug. Furthermore, while multiple solutions might be easier for humans to do, it can also open up opportunities for poorly designed and hard to understand code.

Python, on the other hand, runs on the guiding principle of simplicity: There should only ever be one solution to any given problem. While this can sometimes mean longer, less elegant coding, it does force Python programmers to make code that anyone who reads Python can quickly understand. Because of this handy feature, many people opt to learn Python first.

Furthermore, when it comes to the continuing development of the code, Python is less likely to change drastically. It’s a more conservative language and with its focus on only offering one “right way” to do things, it makes sense that Python wouldn’t make big changes. While this makes Python more stable, it also means it might be missing out on the next big thing.

Ruby, on the other hand, is a language that tries to be at the forefront of development. After all, it was created during the internet boom and gained popularity because it positioned itself as a web development language. As such, Ruby is constantly updated and improved, always pushing for innovation. This can be great for staying on top of trends and can offer a lot of freedom, but the downside is, it can mean constantly having to relearn aspects of the code and risking some stability in the process.

Of course, ease of understanding is all relative; it’s also worth looking into the application of both languages. So, what is Ruby used for? Primarily, web development. In fact, Ruby on Rails, Ruby’s major framework, was created with web development in mind. It offers plenty of features for programmers to quickly and easily make creations. Between Ruby on Rails and Django, Ruby’s framework offers far more support.

Meanwhile, although Python can be used for web development, it also has greater range than Ruby. For example, Python works well for multiple applications, including automation, machine learning, and data analysis. This might be because Python was developed earlier than Ruby and has always had a greater connection to the academic and scientific fields.

If you’re interested in starting your programming language education with Python, then you can start at Hackbright Academy, the coding school for women. 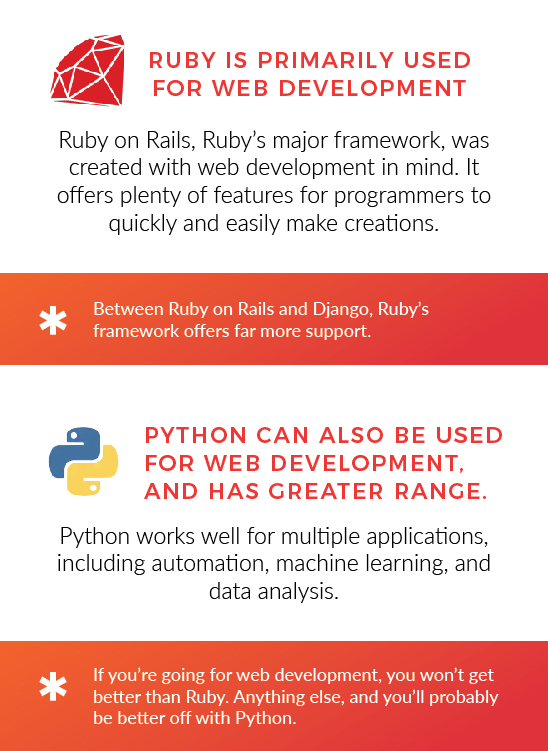 Finally, when it comes to communities, Python tends to have a larger support system. Part of this is simply because Python is older. Although Python was only created four years earlier than Ruby (1991 vs. 1995), Ruby didn’t truly take off until the advent of Ruby on Rails in 2005, giving Python a solid decade’s lead.

Python’s wide range of applications and academic roots also makes its community a powerhouse. That said, Ruby has also developed a vibrant and involved community. With so much focus on innovation, there has to be a community to match, after all. Of course, regardless of the language you choose, both have enough clout to have a solid community; one that certainly won’t leave you in the dust.

All in all, the verdict for the Python vs. Ruby debate will depend on whom you talk to and what you want to do. If you prioritize freedom in your coding and an easy-to-read language, you’ll likely want to start with Ruby. Meanwhile, if you want straightforward solutions and steady coding, Python may be a better option. That said, what it will largely depend on is what you want to do and what your employer expects. Ruby, in particular, is growing in popularity with start-ups.

Of course, while fans of Ruby might object, we at Hackbright Academy are biased towards learning Python first for a number of reasons. To start, Python was designed, in part, as a faster way prototype other code. This means it is not only easier to pick up, but the principles learned in Python will make it easier to pick up other coding languages. Furthermore, with its stability, Python is also easier to teach.

It’s also worth mentioning that because Python has a wider application, it offers a more diverse range of employment opportunities. Not only can someone with Python programming ability do web development, but they also have the potential to work on machine learning, design automated systems, and work with computing research, among other things.

If you’re a woman who’d like to start with Python, consider applying for a coding bootcamp at Hackbright Academy, and become industry ready in just three months! Of course, if you still can’t decide which language to learn, there’s good news: Both languages are typically considered easier to learn than compiled code and are widely available in popular companies. Not to mention, once you’ve learned one, it’ll be easier to learn the other.

Why wait? Get started today at Hackbright Academy.