If you’re beginning to prepare for a career change to development, you might be asking yourself what kind of developer you want to be. With that in mind, it’s important to consider the type of programming you want to work on. Depending on which aspects of programming are interesting to you, you’ll find various roles, programs, and languages that meet your interests.

Front-end development is just the tip of the iceberg. There is much more to web applications that the end-user does not directly interact with. Starting with code written for servers and databases, back-end developers are the behind-the-scenes architects of the web. Everything together is called full-stack development.

What Do Back-End Developers Do? 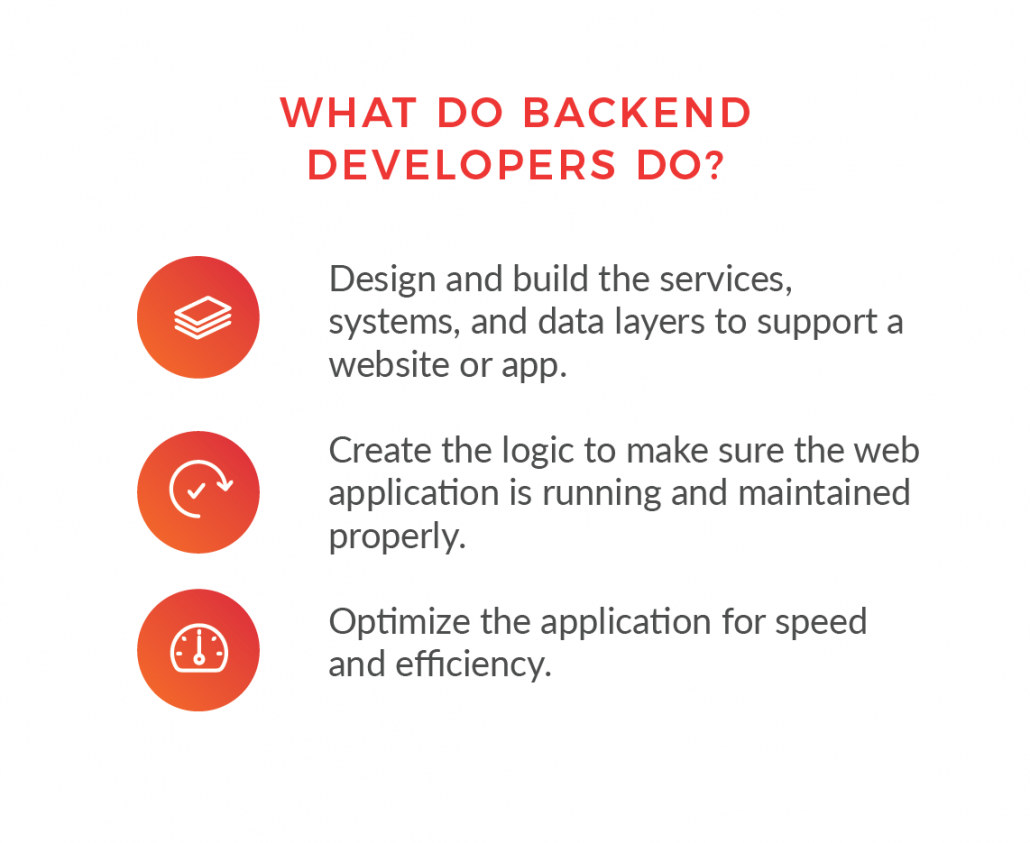 Back-end developers focus on designing and building the services, systems, and data layers that support a website or app. This can vary greatly depending on the size and scope of the application they’re working on.

A back-end developer might be involved in the architecture of a system, where they can create the logic to make the web application run and be maintained properly. They tend to spend more time implementing algorithms and solving problems than front-end developers would do.

Speaking of which, if you like solving problems, consider Hackbright’s Prep course.

Anyway, aside from making web applications functional, back-end developers are also responsible for optimizing the application for speed and efficiency.

What Programming Languages Should a Back-End Developer Know?

Back-end developers can choose from a variety of languages and frameworks depending on the demands of the application they’re building.

One of the most important skills to learn is writing, reading, and processing data from a database with SQL. Back-end web developers need to be well acquainted with server-side languages to help complement front-end user interfaces.

Languages will vary in file size, performance, compatibility, and the style of programming (front-end, back-end, or full-stack). For example, you may want to use the data processing power of Python for a data-driven site, or leverage the speed of lightweight languages like Ruby for faster processing.

Let’s take a look at some of the most popular programming languages used specifically for back-end development.

With all Android apps being based on Java, it is clear that it has been established as a long-time contender for one of the most useful skills for back-end developers to learn, and it is known for being an industry favorite.

Used by Airbnb, LinkedIn, and Uber, Node.js is an application runtime environment that writes server-side applications in JavaScript due to its lightweight code and compatibility with JavaScript on the front-end.

Many bootcamp and coding university programs teach a full-stack, a combination of both front- and back-end development, in their curriculum. As you prepare for a coding bootcamp, continue your studies after, and are working in your field, you’ll probably pick up new languages and skills that can help you stand out as a front-end, back-end, or full-stack developer.

What Kind Of Engineer Do You Want To Be?