What Is Machine Learning (And Why It Matters)

Between smartphones, smart watches, smart TVs, and even smart thermostats, it’s becoming pretty clear that the future of technology is an intelligent one.

And why shouldn’t it be? After all, artificial intelligence has the capacity to be the next frontier in digital technology. As new digital systems learn how to learn, we will be able to transition our tools into actual, reliable assistants. We’re actually building digital helpers — ones that are capable of accurately and efficiently performing complex tasks on our behalf.

But it’s not quite as straightforward as all that. Machines don’t simply evolve artificial intelligence; they depend on talented programmers to make it happen.

With smart tech becoming more and more commonplace in everything from big-data analytics all the way down to automated vacuum cleaners, focus is shifting towards a new science, one that has the capacity to achieve what was once only possible in science fiction: machine learning.

What is machine learning?

Want to see an example right now? Hop onto your preferred search engine and type in the following query:

“What is machine learning”

As you type, you’ll likely notice that long before you’re ready to hit ‘enter,’ your search engine is already making predictions about what you might be asking. For example, upon typing “what,” Google may suggest What channel are the Oscars. Typing “What is,” might result in Google offering What is the weather like today. 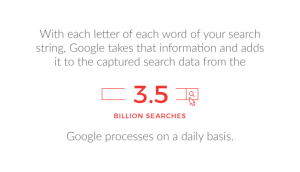 With each letter of each word of your search string, Google refines its predictions. And whether or not it’s able to accurately anticipate that you’re interested in What is machine learning, it takes that information and adds it to the captured search data from the 3.5 billion searches Google processes on a daily basis. It compares the popularity of related and unrelated searches, factors in other potentially relevant data such as your location and language, considers similar searches you have performed in the past, and using a string of complex learning algorithms, distills all that info down within a fraction of a second to deliver an educated guess at what you’re looking for.

How does machine learning work

The Google example serves to demonstrate that machine learning is an incredibly intricate process. But at its core it all comes down to patterns. You feed the learning algorithm some data, it identifies patterns in the data, and then it attempts to predict future patterns. What’s worth noting is that the accuracy of the algorithm is dependant upon the amount and the quality of the data. More data allows the machine to see less obvious patterns; better data allows machines to see the patterns more clearly.

In essence, machine learning attempts to build an accurate model of what has happened in the past, and then applies its findings to predict the future.

And to do that, it relies on three main methodologies.

The three types of machine learning are as follows:

Depending on the data and the problems, the model may look for structure by finding similarities in the data (clustering), detecting unusual patterns that don’t fit with the overall structure (anomaly detection), or by looking at key attributes of the data and predicting other commonly associated attributes (association).

So, we’ve covered the basics of “What is machine learning?” Now, let’s talk briefly about why it matters.

With the internet occupying such a prominent role in the center of our everyday lives, and with more and more previously analogue devices (like that thermostat we mentioned earlier) joining the connected global community, we as a civilization are creating massive amounts of data. How much, specifically? Well, it’s estimated that 2.5 quintillion bytes of data are created every day, and it looks like that number is only going to grow. And in addition to the data we create, we’re also becoming better at capturing and evaluating other data sets, such as those having to do with the environment and human psychology.

In this data, businesses, researchers, developers, and more see the opportunity to develop valuable predictive models. When is someone most likely to buy? What is the likelihood of a hurricane developing at a certain time and place? How do site visitors react to specific web-page formats? The answers to each of these questions (and hundreds of thousands of others) may lie in the data. But before we can extract them, we need artificial intelligences capable of sifting through huge amounts of information and identifying the big-picture structures hidden within.

Why does machine learning matter? Because it’s becoming an integral part of the modern world, and the possibilities are limitless.

Learning to teach machines to learn

Artificial intelligence and machine learning really are the new digital frontier. Be on the forefront of that frontier. With a coding education, you’ll have the programming foundation you’ll need to take your first steps into the growing world of machine learning.

Want to learn to code? Check out our upcoming Prep Course and our immersive 12-week full-time or 24-week part-time Software Engineering Programs.