On October 5-6, Silicon Chef hosted over 150 women assembled in the Mission district of San Francisco last weekend to hack on a combination of hardware and software. This was Hackbright Academy‘s first hackathon (the first of many to come!) and sponsored by Highway1, Autodesk and Stripe.

Recognition by the City of San Francisco!

Shannon Spanhake, Deputy Innovation Officer representing the City of San Francisco in the Office of Mayor Edwin M. Lee, came to Silicon Chef to give Hackbright Academy recognition for the work done in empowering women in programming. 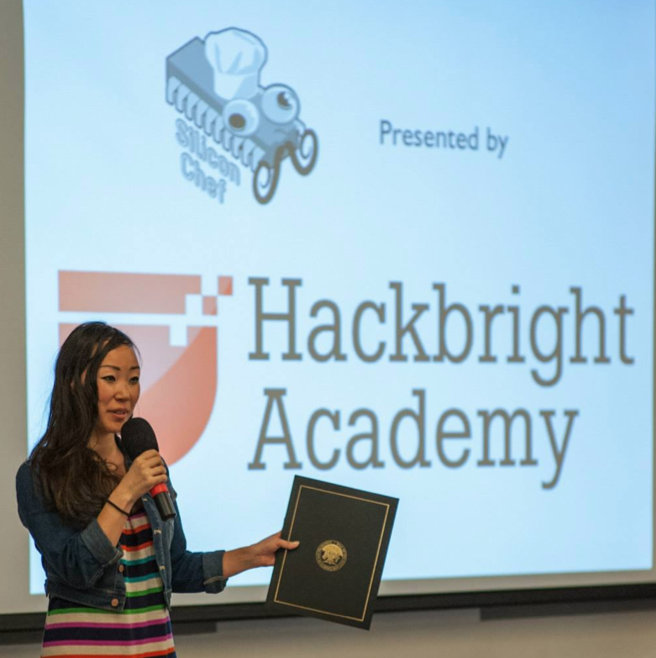 Brady Forrest, Vice President of Highway1, gave a talk about the opportunities in hardware hacking and entrepreneurship. He runs the incubator for early-stage hardware startups in San Francisco.

Julia Grace, head of engineering at Tindie, kicked off the tech talks on Saturday. She wrote a great blog post about how to send an SMS text message in Python by pushing a button on your Arduino.

What’s In The Box?

Star Simpson, experienced hardware hacker and the maker of many things including TacoCopter and Canidu, helped unbox the Silicon Chef mystery box of hardware parts on Saturday.

Teams of five to seven people each received a box of hardware parts on Saturday at Silicon Chef. Their goal: to build a hardware/software solution from those parts (and any additional parts they wanted to bring in) that would change the world! The teams set out to figure out their goals…

…And Continued Thru Sunday…

Thanks to our many mentors who showed up to help the teams at the Silicon Chef hardware hackathon! Everyone pitched in to help teams devise interesting hacks.

Hats Off To The Silicon Chef Organizers!

Special thanks to Hackbright alum Christina Liu and Hackbright instructor Liz Howard for organizing this women-centric hardware hackathon, the first of many to come from Hackbright Academy!

RELATED POSTS
RECENT POSTS
July 01, 2020
Don't Make This Silly Mistake When Learning Python
June 18, 2020
How to Learn Python: Expectations vs. Reality
June 15, 2020
Coding Courses For Women: Why Do We Do It?
June 12, 2020
An Introduction to Coding Courses for Women
CATEGORIES