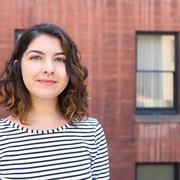 One of our most recent alumnae, Gabriela Cisneros graduated from Hackbright in September 2018. A former educator, she is looking forward to entering the tech industry in a role where she can combine creativity and logic. Immediately following graduation, Gabriela attended the Grace Hopper Celebration in Houston at the end of September. Here, she shares her experience attending the conference as a newly-minted software engineer and bootcamp graduate. For more of Gabriela’s writing, follow her on Medium.

Before I left to Houston, I did some research on the conference. I knew there were sessions (workshops or talks), the Career Fair (company booths), and the Interview Hall (where interviews are held if you are invited to one). I had a long list of sessions that I wanted to attend, I knew I wanted to network in the Career Fair, and I had one interview scheduled. I figured I would solidify my schedule once I was at the conference and had a better sense of the flow.

So, I arrived to Houston bright-eyed and bushy-tailed with a half empty suitcase for all of my new t-shirts and swag. I was ready for an empowering start to my new career. I had just finished my coding bootcamp, Hackbright, the week before and had changed my title from “Software Engineering Student” to “Software Engineer” on my LinkedIn. I was ready to learn and mingle.

On the first day, my friends and I made our way to the opening event, which took place at the arena next door and consisted of opening remarks by the CEO of AnitaB.org, Brenda Darden Wilkerson and keynote addresses by Padmasree Warrior and Jessica O. Matthews. The opening remarks by Brenda D. Wilkerson made me feel like I belonged there. She welcomed every woman from all paths, whether they got into tech with a Computer Science degree, a coding bootcamp, or courses at a community college. This conference is for me, I felt it deep in my bones as she talked.

After the opening remarks and keynote addresses, I felt energized and ready to take on the world. We made our way to the Career Fair where hundreds of companies awaited us and the other thousands of attendees. There were two massive lines with rows of people waiting to get inside. Walking into the Career Fair felt like walking into Disneyland with tall, colorful displays and long lines all around me. 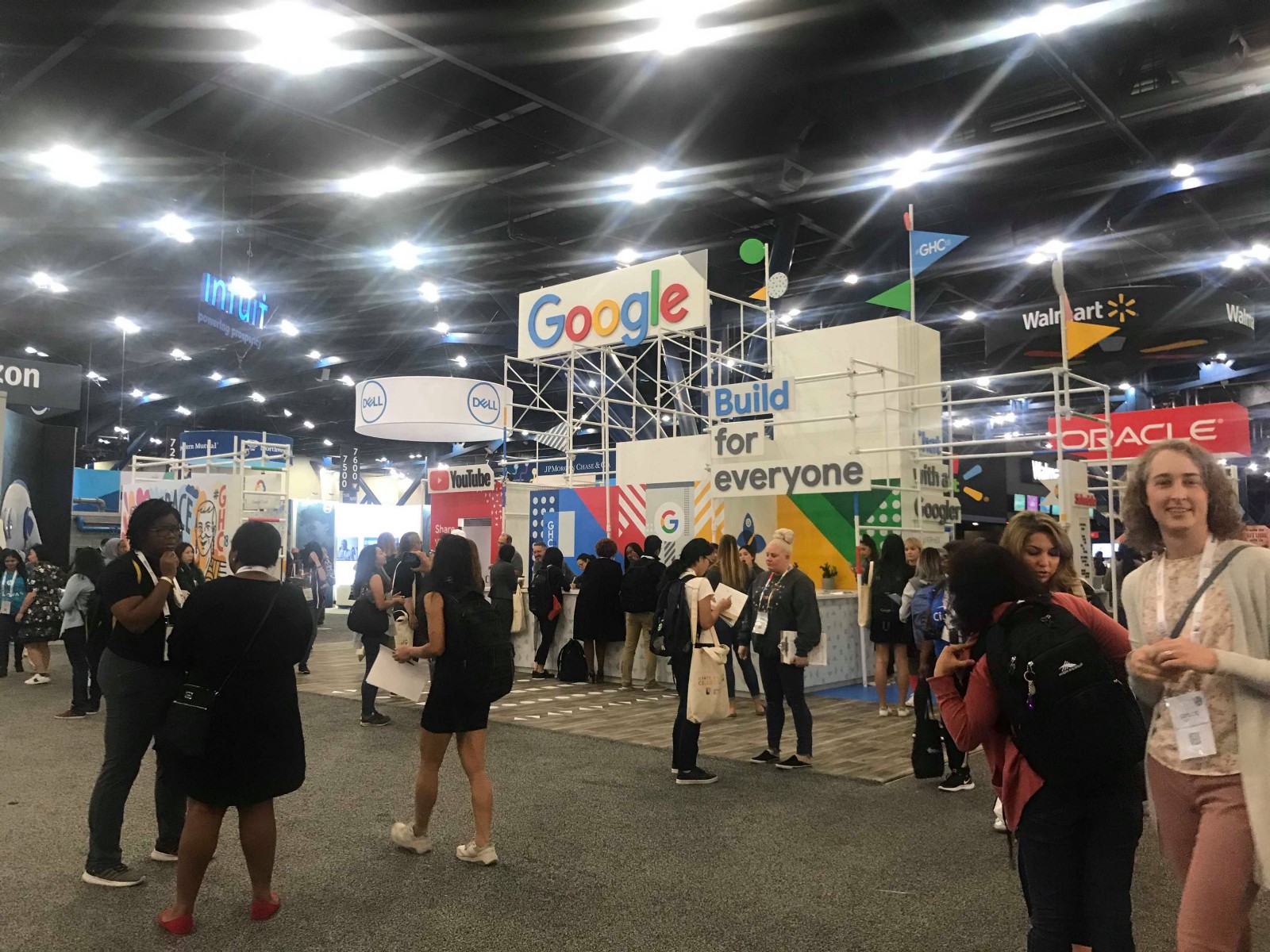 I enthusiastically made my way to the companies that I really wanted to talk to first. Yet my enthusiasm was rarely reciprocated. Company booth after company booth, I could sense the disappointment at the recruiter’s realization that I did not have a Computer Science degree, especially when the rest of the people in line were university students or soon to be graduates with Computer Science degrees from distinguished universities. Some of the companies that I talked to do hire bootcamp graduates, but only after they have already gained experience elsewhere. I got the impression that many companies are not willing to take the first step in hiring bootcamp graduates, but will hire them once they have been successful elsewhere.

After a few hours at the Career Fair, I left drained and disenchanted. I did not step in again that day. The following day I had my interview scheduled, so I went back to the Career Fair an hour before my interview to meet the recruiters and to share that I looked forward to the interview. The recruiter had e-mailed me the weekend before to express interest in interviewing me. I was pretty excited that a recruiter had e-mailed me, so we set up an interview.

Fast forward an hour later, while sitting in the interview booth, it became clear that the recruiter had no idea that I was no longer a university student. I wondered if she had even taken a look at my resume. We still went through the interview and at the end she told me to look online at their careers page to find relevant job positions, which was her polite way of saying they would not be moving forward with me.

After the interview, I realized I had to reassess how I wanted to spend my time at Grace Hopper. The whole first day and a half I felt an intensified imposter syndrome, which made it difficult to enjoy the conference. So, I decided to shift my mindset. Most of these companies were not ready for women like me from non-traditional paths. I was not missing out on them, but they were missing out on me.

The rest of the conference I focused on building connections by attending sessions, receptions, and recharging with my friends. I attended the Latinas in Computing reception where I got the chance to meet Latinas from New York, Los Angeles, and Philadelphia. I also attended a session on smart devices and privacy where I met a woman starting her PhD at the intersection of philosophy and science on Smart Cities. I also spent a lot of time at the Google on the Green tent, which offered games, food, lounging areas, as well as a towering birthday cake for Google since it was turning 20 that day (yes, people did sing “Happy Birthday”). 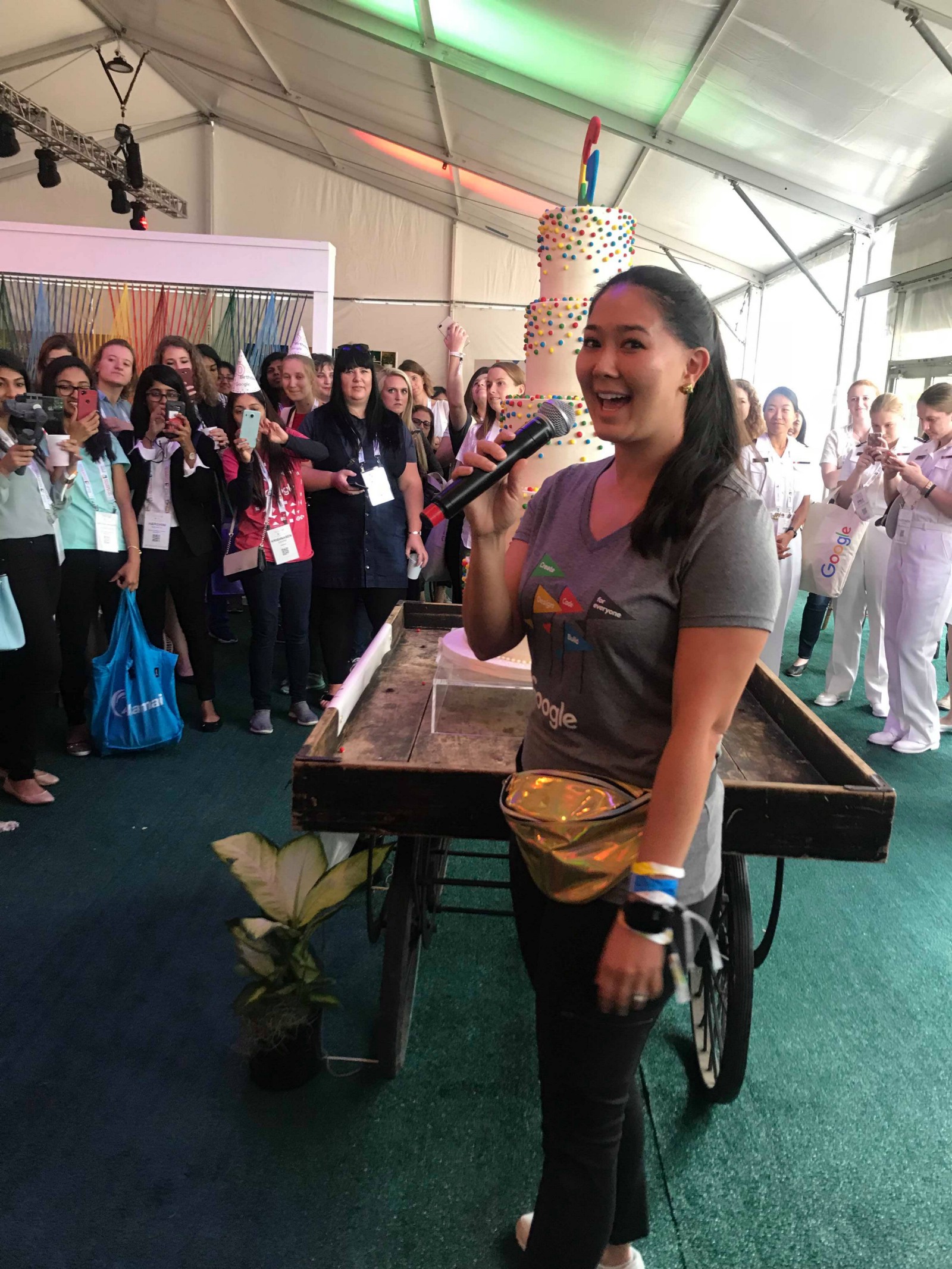 Aside from meeting and making new friends, some highlights were the Ladies Who Launch fireside chat featuring Arlan Hamilton, Founder of Backstage Capital and April Underwood, Slack CPO. Arlan said, “Don’t compare your chapter 2 to someone else’s chapter 30,” which resonated deeply with me that morning. As I sat there in the room surrounded by women of color engineers and founders, I knew I would be okay on my journey. When I think about how far I have come these past few months, I have come a long way and I am excited for what my next chapter holds.

I attended Grace Hopper right after my bootcamp ended, so right at the start of my job search. It was discouraging speaking to a lot of the companies at the Career Fair since I did not fit the profile they were looking for (although I did get a pretty sweet headshot from Indeed at the Career Fair). I would not discourage other bootcamp graduates from speaking to company booths, but do go in knowing that the Career Fair is targeted toward university students and new graduates. If I were to attend again, I would spend more time attending sessions and workshops.

Some other highlights were Jessica O. Matthew’s keynote address, the Women of Color Hop Up hosted by Google, and every word Brenda D. Wilkerson said. At the end of the conference, she stated, “A woman’s job is any job she chooses.”