Inside Scoop On How To Win A Hardware Hackathon, Despite Being New to Hardware! Team “A Graceful Exit” Explains The Learning Process

A Graceful Exit won “Best Internet Connected Hardware” by building a beautiful, functional LED visualization of bus arrival times. Below, the team members share their technical journey during the 2-day Silicon Chef 2014 hackathon and reveal that a small production run may be in the works!

At the 2014 Hackbright Silicon Chef Hardware Hackathon hosted at Stripe, we formed a team of six which included Hackbright alumni Meghan Hade, Ashley Lorden, Kyla Farrell, and Kieu Tran, along with Kelsey Stemmler and Tiffany Lee. The hackathon was exclusively for women and open to people who were new to hardware, which describes most of our team. 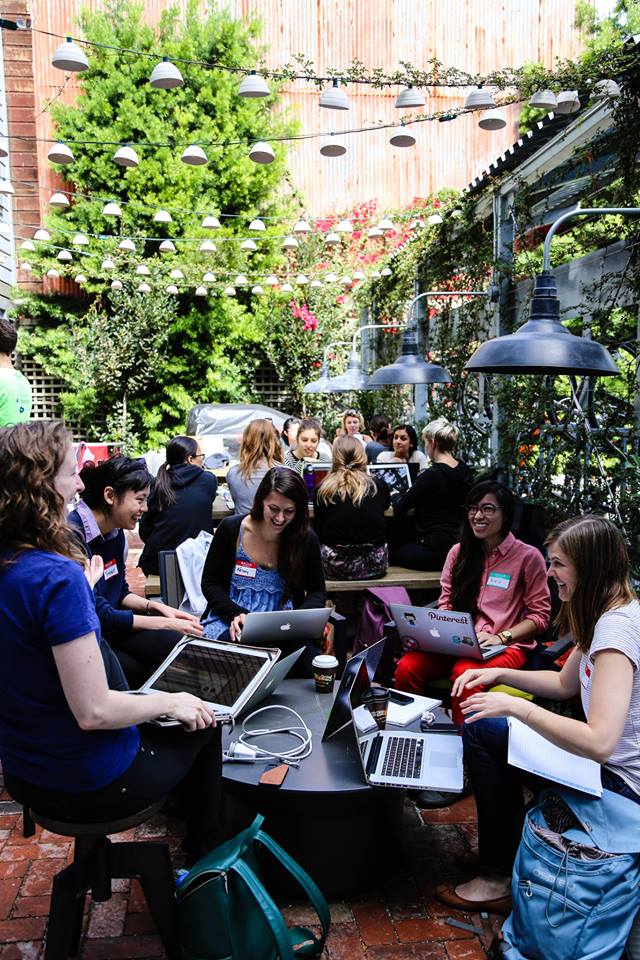 We arrived with just our computers and received a hardware kit which included an Arduino, an Electric Imp, and a variety of sensors, cables, and other tools to get started hacking. Meghan captained our team, which we named “A Graceful Exit”. She drew on her background in urban planning, mapping and design to propose an object that would visualize bus arrival times in an abstract and beautiful form. The proposal focused on the utility and delightfulness of the object rather than aestheticizing the technology. We all loved the concept and were excited to get to work!

​Our primary challenge was to figure out how to control 30 individual LEDs, which would represent the time until the next approaching bus, and connect them to the NextBus XML feed. After an afternoon of experimenting with the Arduino board and the Electric Imp, we had some LEDs blinking — thanks to step-by-step tutorials and the help of the many roaming mentors — and some idea of how to proceed, but had hit a roadblock regarding the number of LEDs we wanted to control. Ideally, we would use only the Electric Imp board to drive the LEDs since it included the essential WiFi connection, but it had a limited number of I/O pins. At some point, the term “charlieplexing” was mentioned by a mentor. With a little research, we discovered that using this technique (n) pins could drive (n * n-1) LEDs. That meant that the six pins on the Electric Imp board could, in fact, be employed to drive all 30 of our LEDs! A couple of hours later, we were charlieplexing experts and had a diagram drawn up of how to connect our LEDs to our Electric Imp. 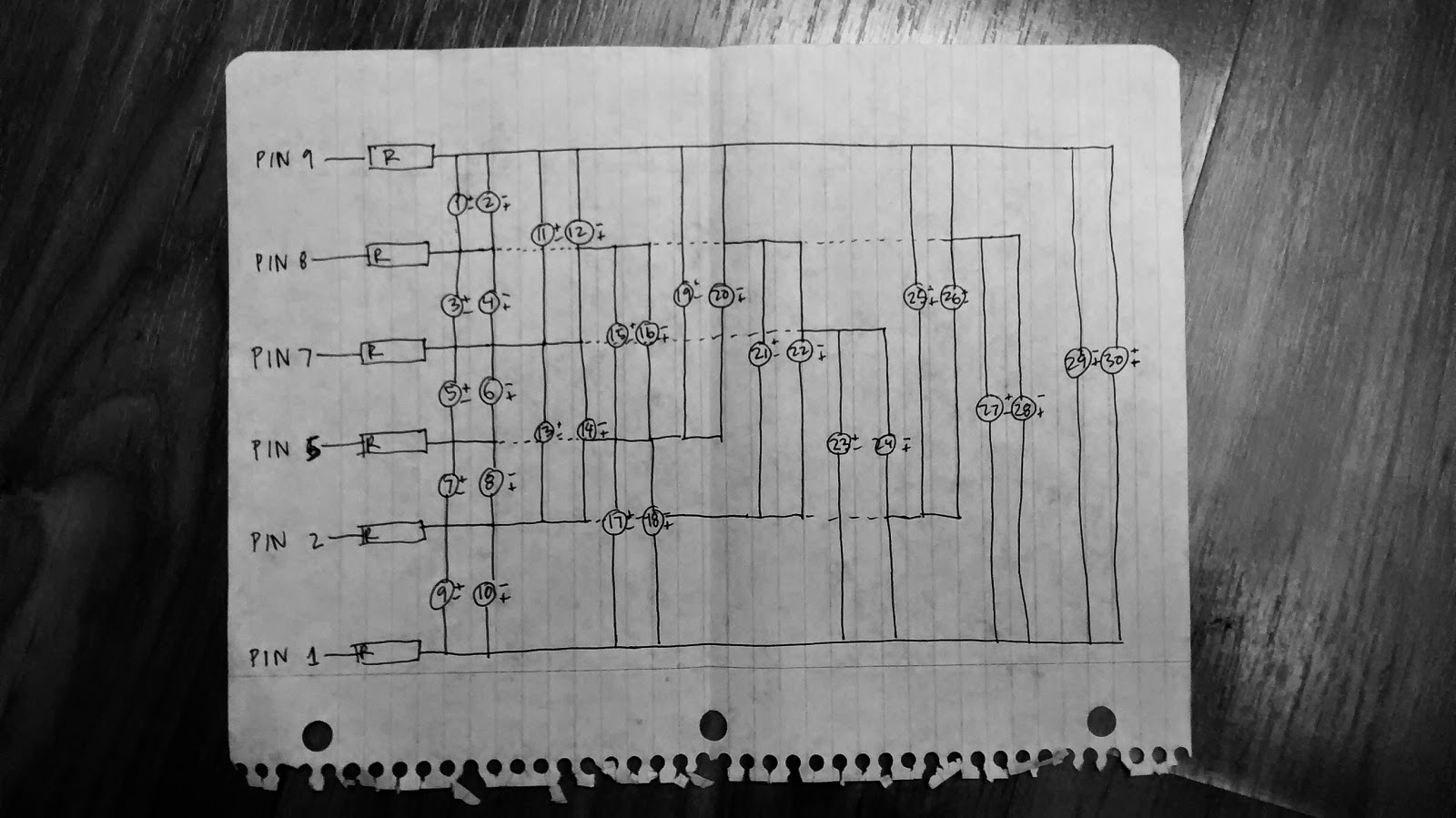 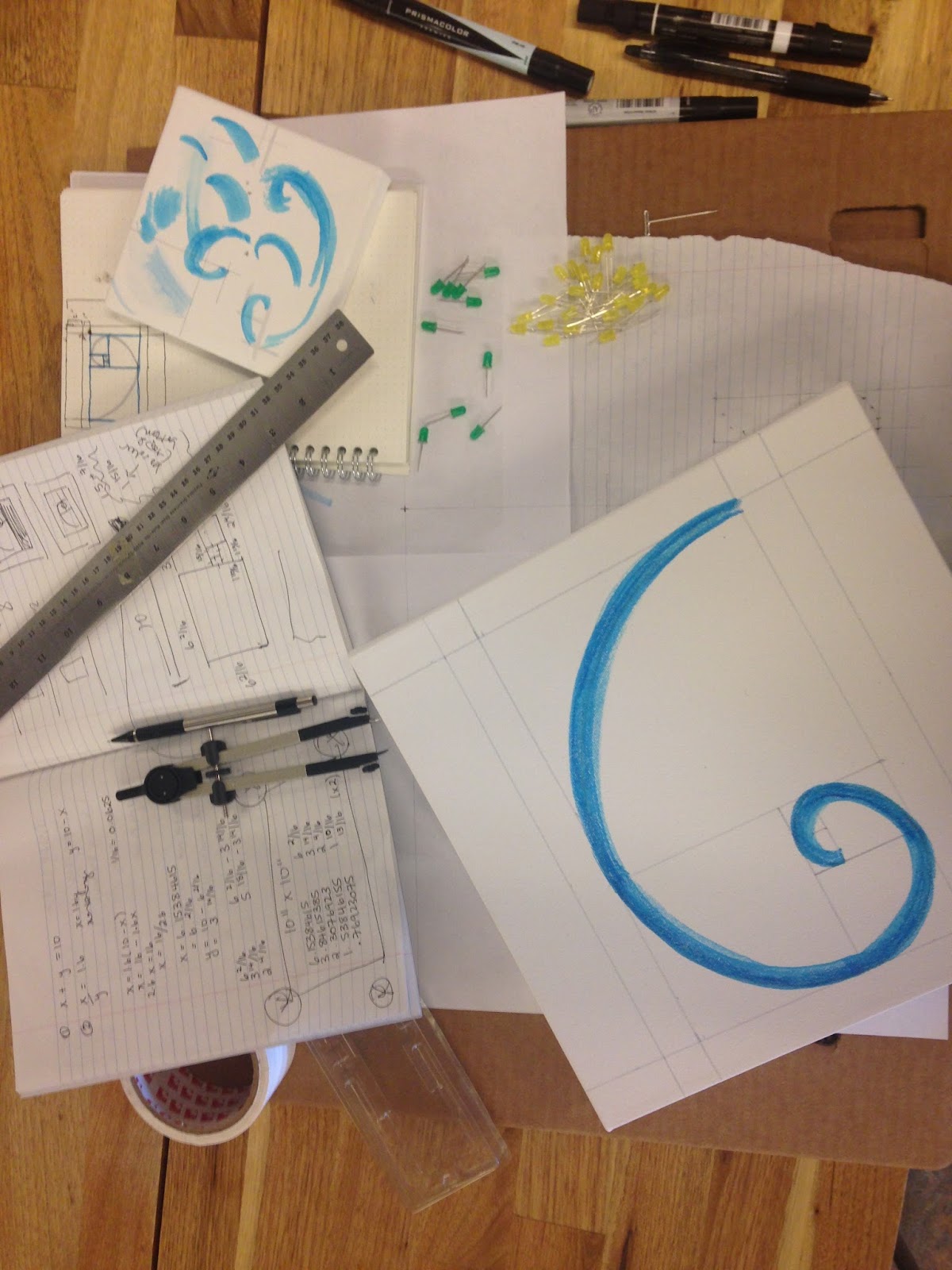 Sunday morning kicked off a day of masterful teamwork. We had several tasks that needed to be achieved by demo time.

Ashley learned Squirrel, the Electric Imp programming language, and coded an agent that connected to the NextBus XML feed, parsed the number of minutes and sent it to the Imp device, where Kyla had written the code to control each of our 30 LEDs.

We couldn’t have done it without Gino from Electric Imp, who provided troubleshooting and support. Thanks Gino!

We had decided to include one outside element in our project to meet the aesthetic focus we were going for, a canvas. Meghan and Kelsey set to work on the “front-end” of our project — precisely calculating the size of the fibonacci spiral and the spacing of the LEDs and drawing it on the canvas. 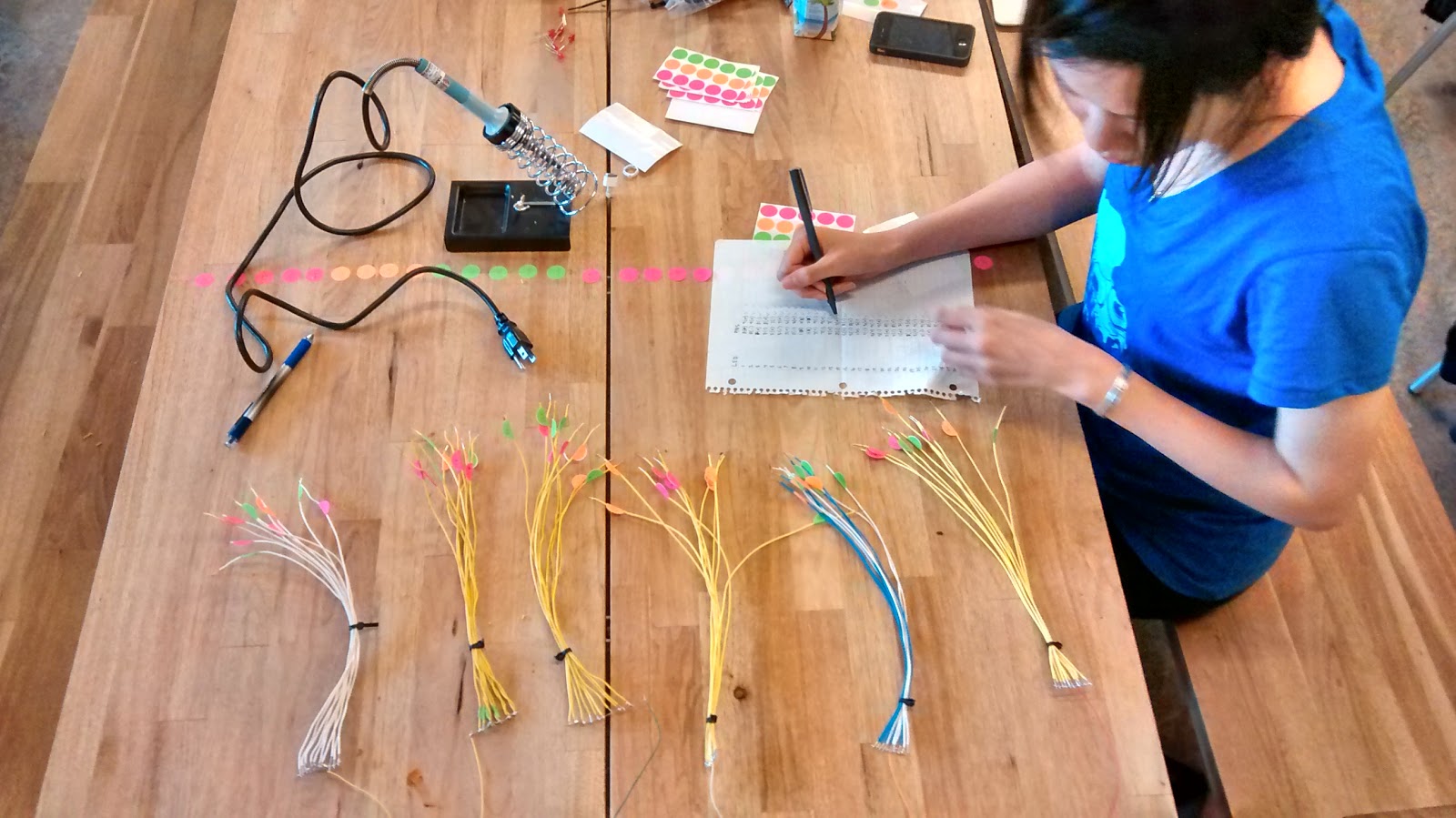 Meanwhile, Tiffany, Kieu and Kyla had 60 wires to keep track of and solder together in a specific sequence. 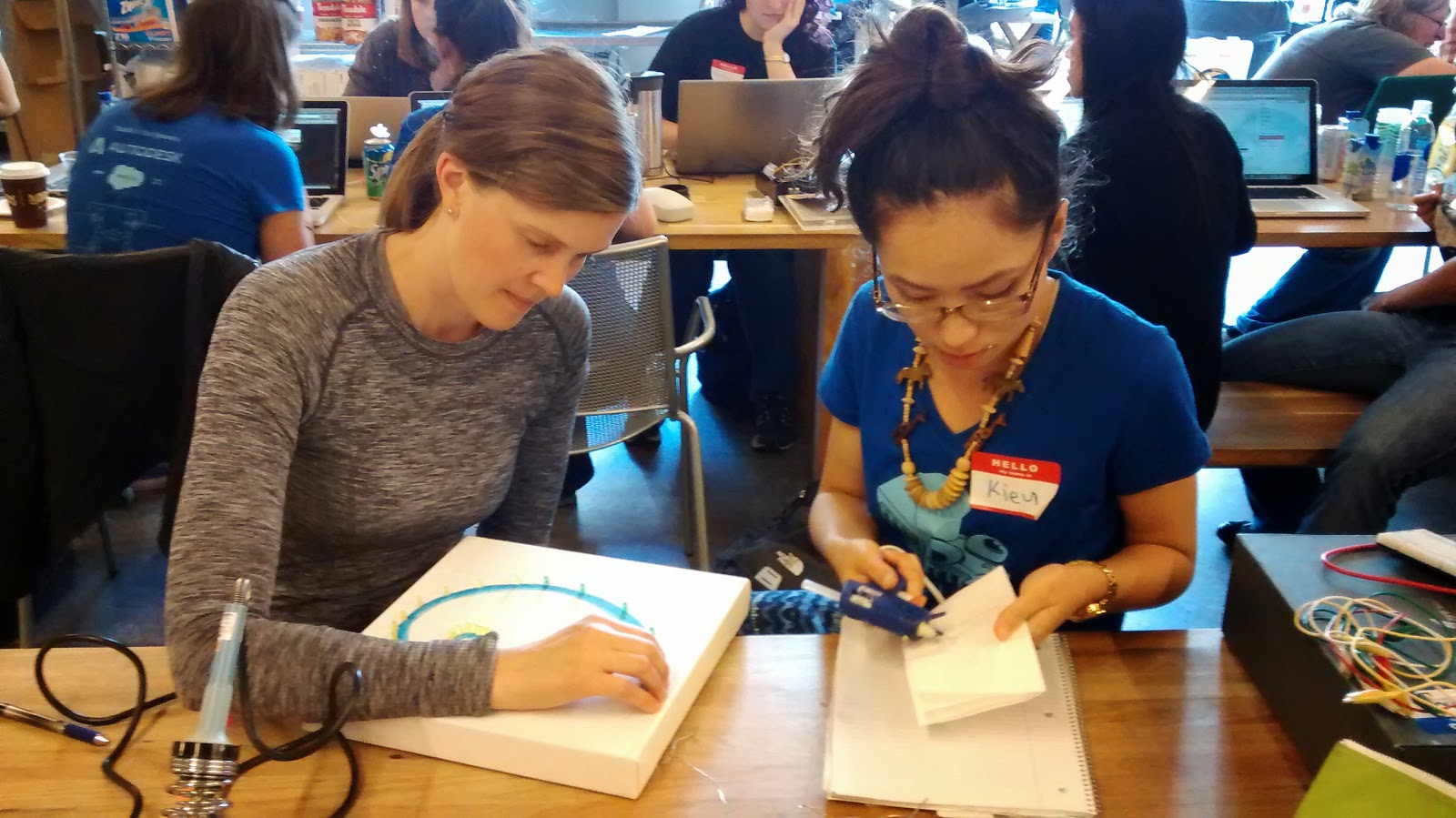 We organized, labeled, tested, checked and double checked all of our wires — we would only have one shot at soldering everything together, and troubleshooting a bad or wrong connection right before demoing was not a good scenario. 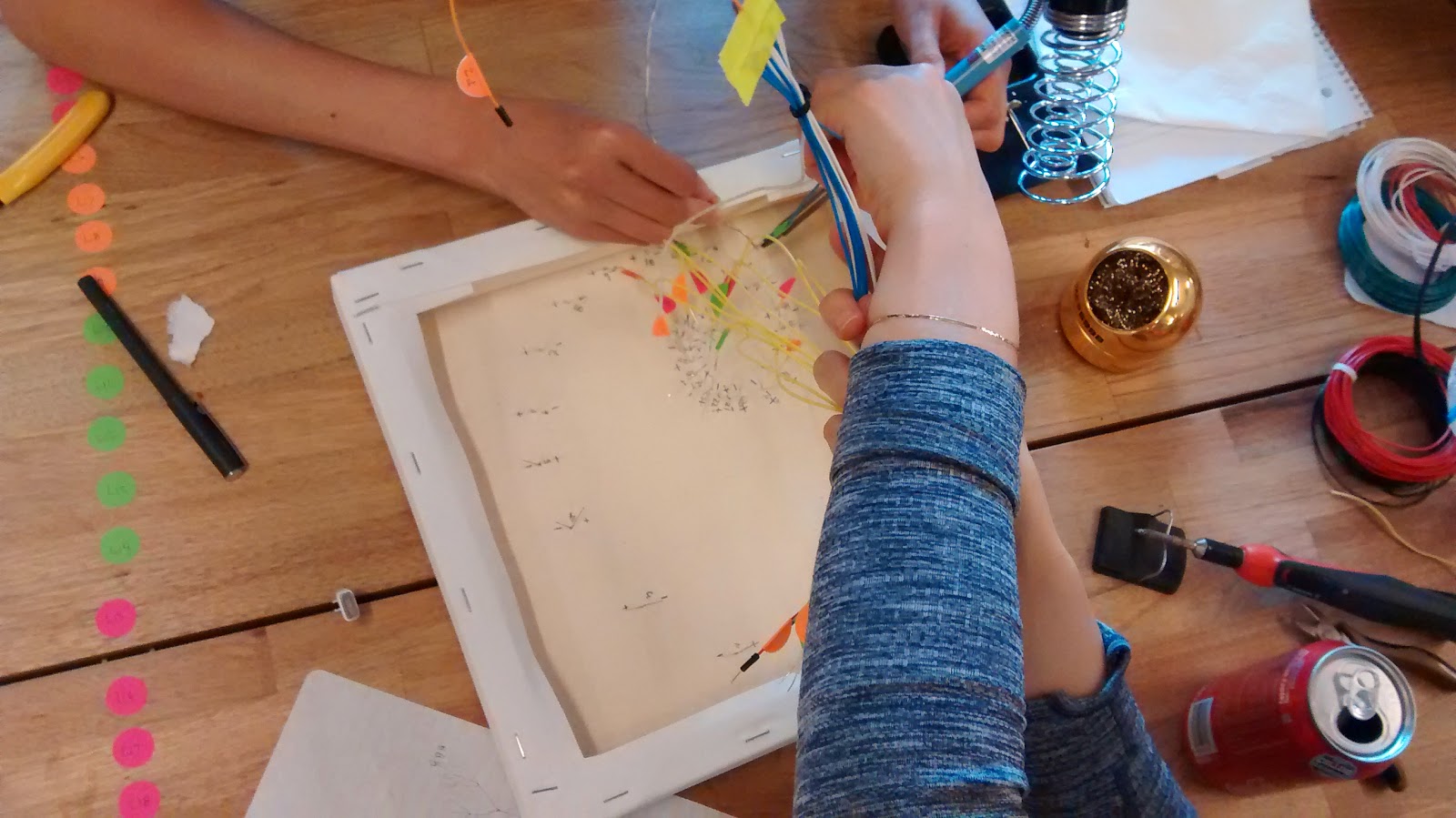 All of the organizing payed off! Meghan and Kieu glued the LEDs to the canvas and Tiffany and Meghan soldered the wires to the LEDs. 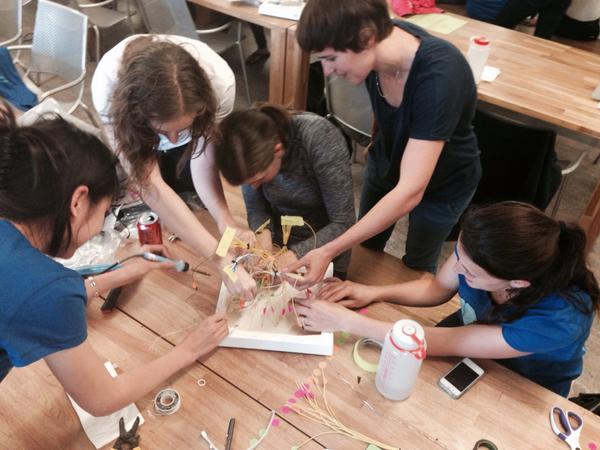 The final LEDs were tricky to reach and we all lent a hand. 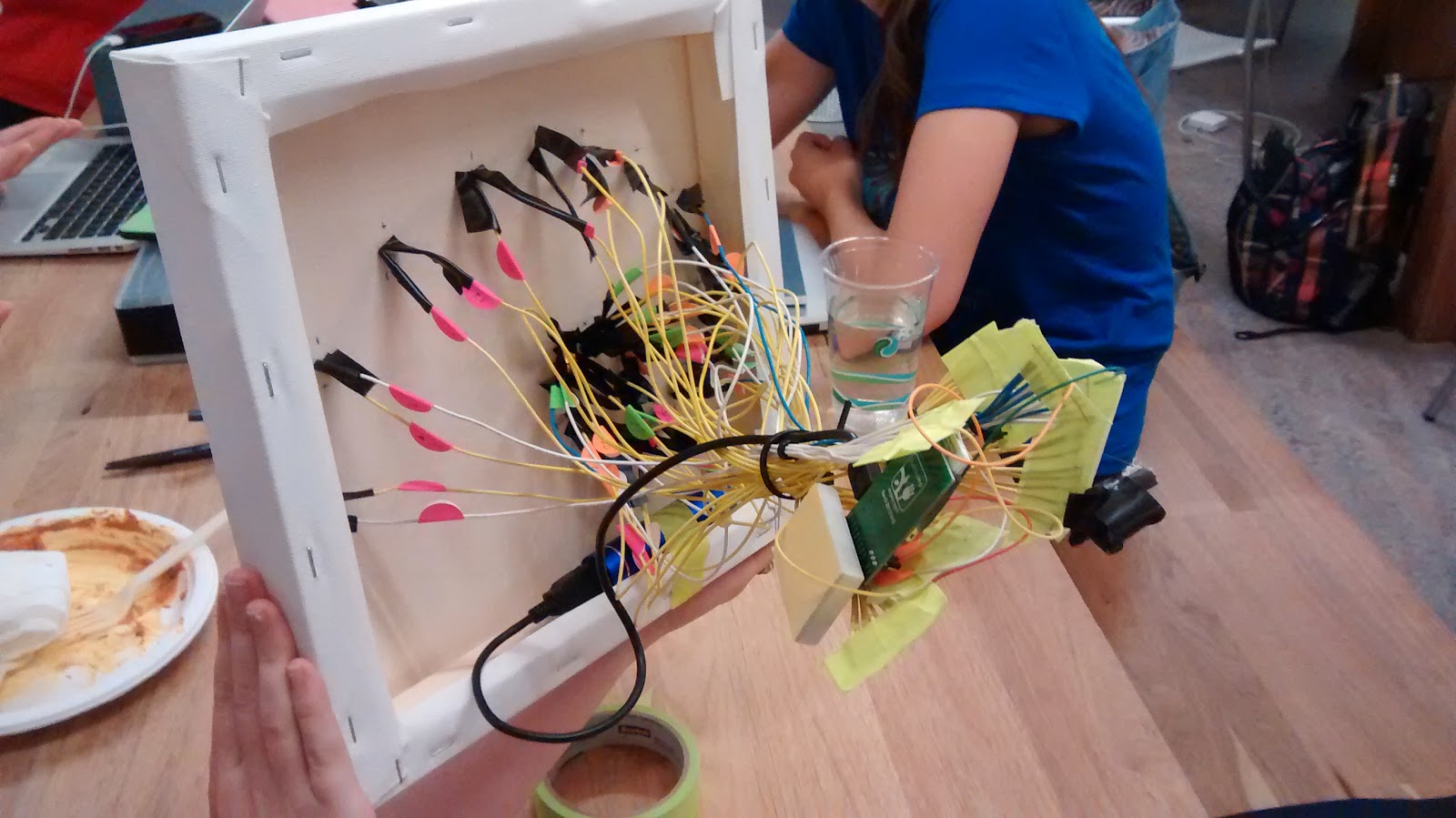 Fingers crossed, we plugged in the Electric Imp board and like magic, the LEDs lit up, as planned! And just in time for our demo! 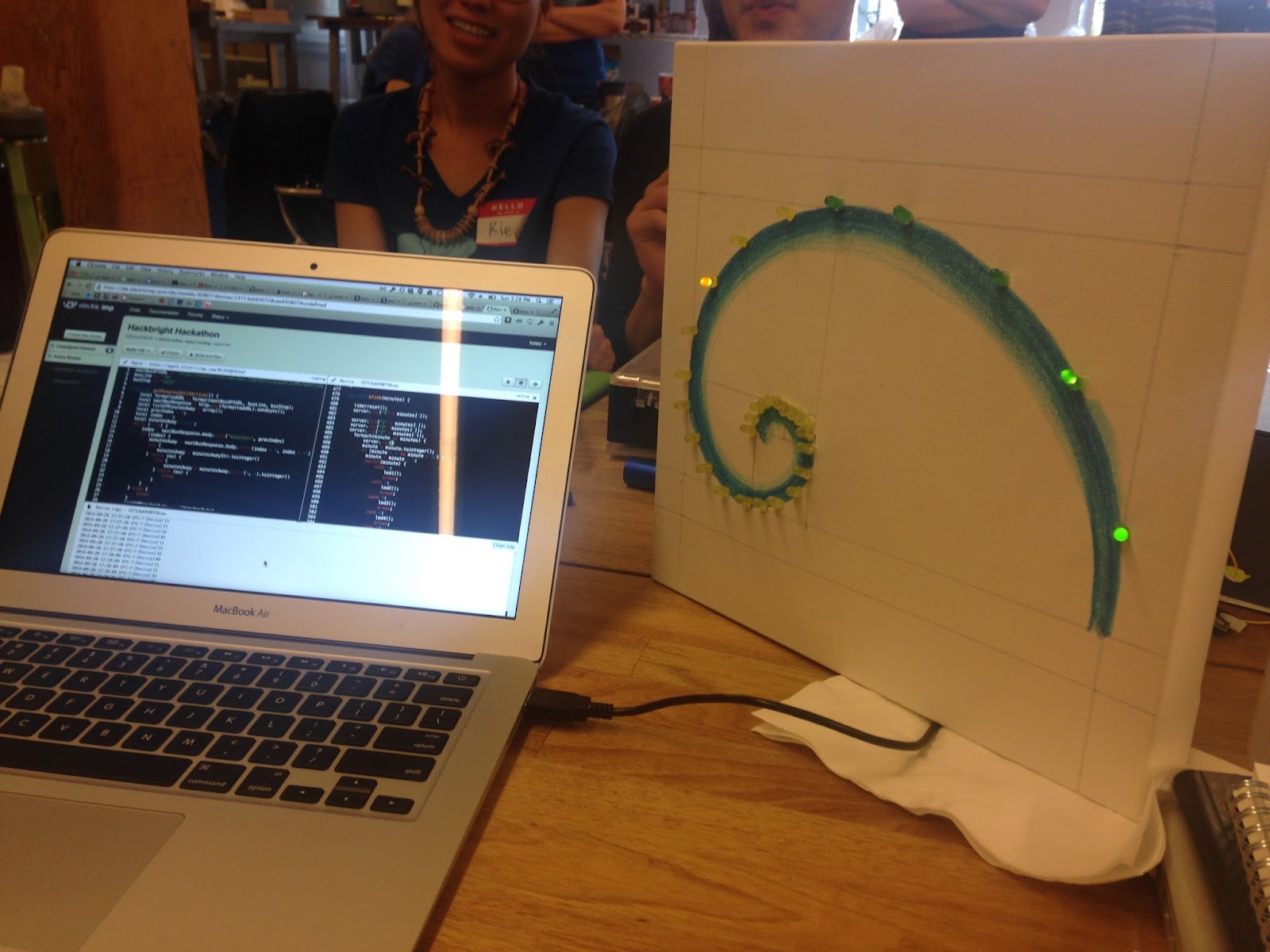 Kieu read the description she had prepared: “A Graceful Exit is an ‘enchanted object’ that blurs the line between data visualization and decorative art. It uses the Next Bus API (not fake data!) to display the bus schedule of the 38 Geary inbound bus at Gough and Geary, but can be easily personalized. We decided to push the boundaries of the Electric Imp board by driving the maximum number of LEDs off the 6 embedded pins in the board. We used a type of multiplexing called charlieplexing to drive 30 LEDS off of only 6 pins, so that we were able to not use the Arduino board. As you can see, the design is based off of everyone’s favorite recursive spiral, the fibonacci sequence. Each square of the design accounts for 5 minutes, for a total of 30 minutes and every lit LED represents an approaching bus. Our project turned out to be a challenge of organization, soldering, and creativity.” 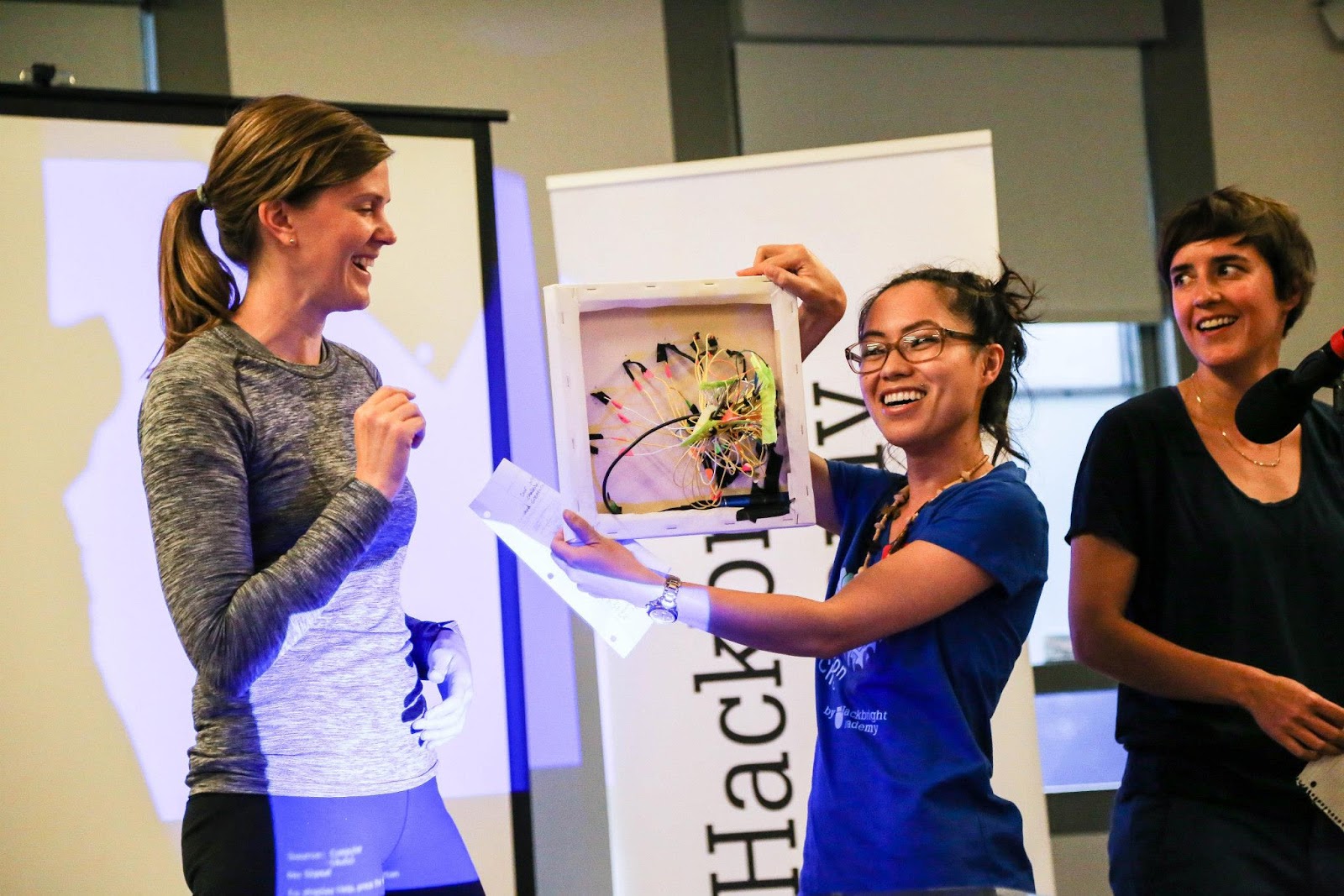 We were very proud of what we had achieved in such a short time, and with limited previous hardware experience. We won “Best Internet Connected Hardware” and are considering a small production run of the Graceful Exit product.

The Electric Imp was key to the success of our project, and is a super interesting technology that we’re excited to experiment with further. For several team members, this was a first hackathon, and Hackbright’s Silicon Chef was a great experience!

If you’re interested in purchasing your own or have other questions, we can be reached at AGracefulExit@gmail.com.

RELATED POSTS
RECENT POSTS
May 26, 2020
5 Inspiring Women in the World of Tech You Should Know About
May 19, 2020
Why Should You Learn Software Engineering?
May 11, 2020
Hackbright's Community of Phenomenal Women Who Code
April 30, 2020
Read About Anna's Journey Into Software Engineering on Course Report
CATEGORIES