A Beginner’s Guide to Python

Is Python the “best” first coding language? What can you build and what types of jobs can you get with Python skills? Meggie Mahnken, Senior Director of Education at Hackbright Academy, sat down with Course Report, a top online resource for intensive bootcamp programs, to explain the origins of Python, how Python is used by real developers, and why we teach Python at Hackbright Academy. Here’s our beginner’s guide to Python programming – plus some free resources to get started. 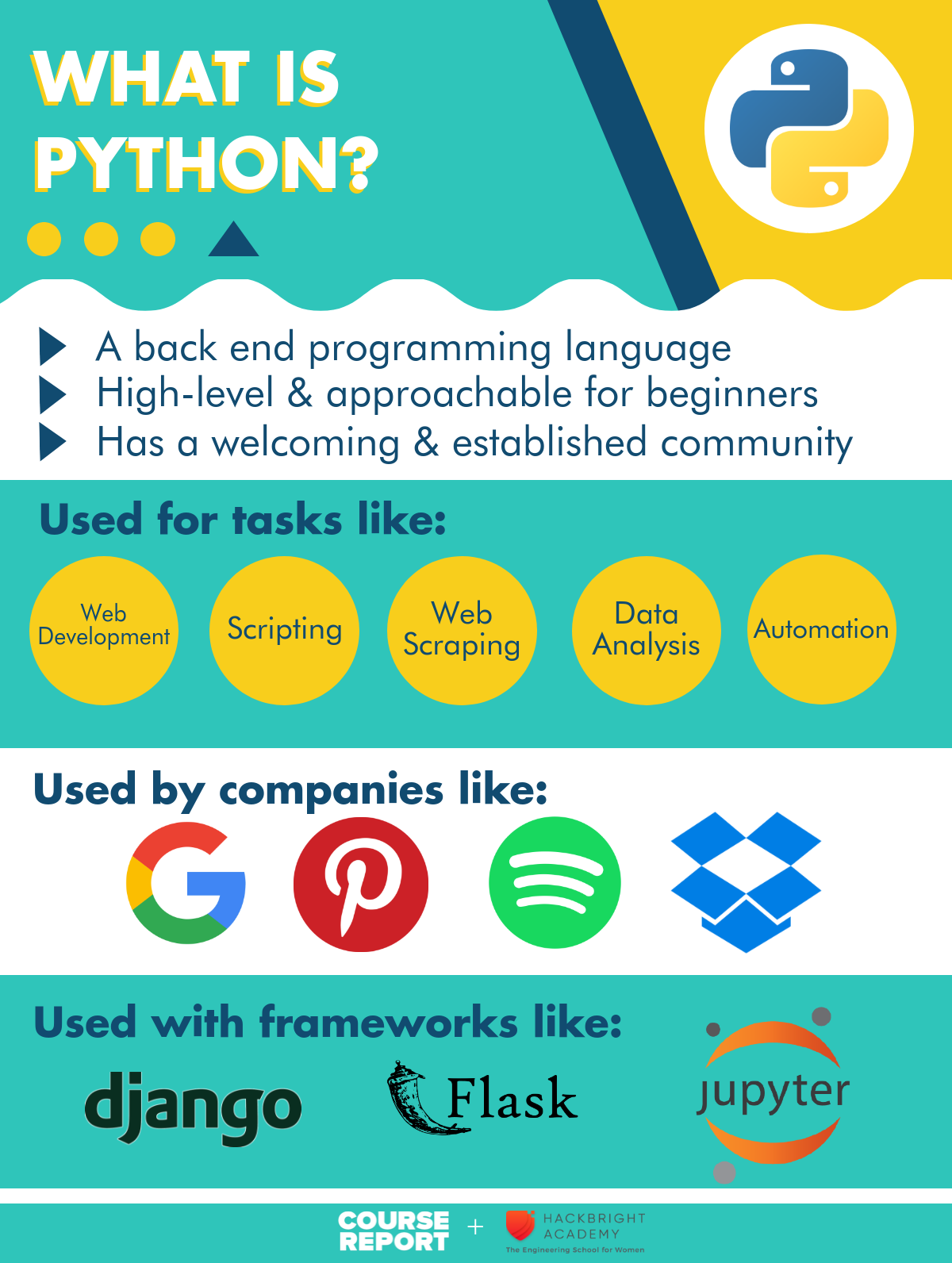 What are the origins of Python?

In the mid-1980s a Dutch fellow named Guido van Rossum was working on an educational project to build a language for new coders called ABC. As a result of working on this project, Van Rossum became interested in language design, and that’s when he started working on Python. He made some unusual decisions, which really set Python apart from the zeitgeist at that time, and continue to make the language special today.

One of Van Rossum’s decisions was to make indentation meaningful, which is unusual in programming languages. Critics who thought this would make the language hard to use didn’t receive the idea very well, but this feature is part of the reason why Python is both readable and popular. Good code style and readability is enforced by the way you have to write Python. When I first learned about indentation in Python, it struck me as a reason for the language’s success.

A lot of Python’s design is about encouraging developers to make good decisions, so that Python code is more readable. Although indentation is enforced in Python, a lot of other things are not enforced, so you have to be a responsible coder to actually write good Python. Unlike Java – not to be confused with JavaScript – Python doesn’t yell at you if you call a variable or function a particular name, and it doesn’t require you to define a type.

People often describe Java as a really controlling parent, who actively prevents you from playing in the road and forces you to stay in the house. Even though JavaScript has come a long way, it could be said that JavaScript is the parent who actively encourages you to make bad choices and play in the road. Python is somewhere in the middle: the parent who says you could go play in the road, but should you? They’ll let you do it, but it’s your decision, and you have to deal with the consequences. So Python is somewhat of a happy medium, which is great when practicing the basics of programming.

Why is Python a great first coding language for beginners?

Which frameworks wills I use with Python?

How do real developers use Python in their jobs?

When I ask alumnae or mentors what they use Python for in their jobs, this is what I hear:

Most big companies use Python for something. Yelp is a well-known Python shop. The creator of Python works at Dropbox, and much of Dropbox is built on Python.

Websites which use Python in some aspect:

What are the disadvantages of Python?

Python is slower than other languages. There is a trade off between how high-level and abstract a programming language is and how efficient it is in terms of memory usage and space usage. Python is not low-level, so it’s not as fast or efficient as a compiled, lower-level language, like Java or Rust. It’s less common to use Python to build distributed database systems or other systems where speed is incredibly important.

There are also some concerns about scalability, although I know that you can make Python scalable with different implementations of the language, such as PyPy.

What are alternatives to Python?

Why does Hackbright Academy teach Python instead of Ruby and Full-Stack JavaScript?

At Hackbright, we’ve stuck with Python because it has a design ethic that works really well for new programmers. The ideas central to the language of Python are summarized in an Easter Egg in the language, which is a poem called The Zen of Python:

Teaching Python helps our education staff encourage students to prioritize the pursuit of elegance, rather than trying to write the most clever or complicated program.

It’s also a really nice language for learning core computer science topics. Coding bootcampers need to learn those intermediate/advanced concepts that come in the second or third year of a computer science degree, like:

Python lets students stop thinking about syntax and just focus on problem solving. Hackbright students are excited to learn those computer science fundamentals, and Python doesn’t get in their way.

What kind of jobs can you get with Python?

At Hackbright Academy, we focus more on back-end web development, so we see most of our grads getting standard web development roles like Software Engineers, Web Developers, and Front-End Web Developers, working in Python or in other languages. The protocols, tasks, and workflow you learn when you become a web developer will be a good foot in the door for technology jobs. We see a lot of grads going into web development first, then if they do eventually want to work in data science or scientific computing, then they can shift over once they’ve learned all of the core principles.

A couple of Hackbright grads have gone into Data Analytics or Data Science. Maybe they worked on a dev team or as a business analyst before attending Hackbright Academy, so they already had some general experience, but they needed to know Python in order to specialize. Python is the language if you want to go into machine learning or data science, and it has an excellent set of libraries for that type of work.

How can I start learning Python?

Codecademy (free or paid): A good place to learn what programming is about and what it feels like. However, I think people need to go a little farther than Codecademy and hit some of the harder problems to know if they really like programming.

Programming for Everybody: Getting started with Python by the University of Michigan on Coursera (free or paid): Great for folks who want consistent, comprehensive coverage of a topic. Actually, I originally got started in Python by taking a Coursera course.

Think Python: How to think like a computer scientist (free): For people who like books or self-paced learning.